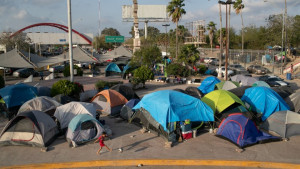 The Trump Administration's Migrant Protection Protocols do everything but protect migrants.

That's according to Mariah Carlson, who saw first-hand the situation on the border near Brownville, Texas.

KBOO's Yasemin Cobanoglu spoke with Carlson about her experience.

Photo: Asylum seekers stay in tents in Matamoros, Mexico, across the border from Brownsville Texas.

My name is Kathy Mariah Carlson, I go by Mariah. And I just came back from Brownsville, Texas, where the MPP is in place, which just means that stands for Migrant Protection Protocol. Believe me, they're not protecting the migrants and these people aren't migrants. They're refugees.

Anyway, I just came back from doing two different things down there. One was working with Team Brownsville, who has been feeding 1000 people a day for about a year. Every night they feed them dinner. And so I helped do some cooking. And then after you we cook on the US side, then you load it into the car, then you take it to the bus station where you get these little wagons that you pull over and you go across the bridge. You walk them across the bridge and then set up there's a line set up and then we serve the people. And then on Sunday, this past Sunday, they started- there's another thing happening down there, it's called Witness at the Border. And that is a program that started in Torino, Texas, they eventually shut down a child prison there by just going and witnessing. And then they moved to Homestead, Florida and there was another for-profit child prison there. And they got that one shut down last August. And so the new target is Matamoros, which is the name of the town on the other side of the border from Brownsville where right now, there are about 2500 people in this camp and it's- it's growing all the time. I got down there a couple weeks ago, and they said there was 2200 in the camp. And then before I left, they said there was 2500 in the camp, and about 500 of those are small children. We're talking about babies and preschool age.

So it was supposed to be that the Mexican government was going to help take care of these people, but they you know, the really haven't so far. So Team Brownsville has got some grant money and matching funds and they actually installed a water filtration system. And so they are now getting drinking water out of the Rio Grande. They still- they don't have any place to shower they have outhouses that frequently are way more full than they should be. And Team Brownsville has struggled to find a provider to pump the out houses on a regular basis and they've gone they said six months and now they finally have somebody that's actually doing what they say they're going to do they have to pay a month in advance and what was happening is they were paying and then they come a couple times and it wouldn't come anymore. So they went through several of those, everybody's trying to make money off these people.

The Mexican government is at first- when this- when they started helping the- the people they said they could only bring we could only bring over used clothing now the government Mexican government says they can only be new clothes and you have to bring the receipt. And then the Mexican government charges 16% tariff on donations. So when you cross the border, you cross the bridge. This- this tent camp is right there. And so a couple of things are happening with that the the Mexicans have just recently said that we can't bring over any more tents. So they were helping- they were providing tents for people like every family would have a little tent. And now the government doesn't want that because they want to move these people so they're out of sight of the bridge because the bridge everybody can see them as they drive across and thousands of people cross that bridge, every day, most of my think are Americans coming back to the States. And you know, they want them out of sight out of mind. So they want them to move up the hill and over the hill.

And it would be much harder for our program to help them if they did that. Then they want to put them in giant tents, you know that that will serve like 100 or more maybe 200 those big, big huge army tents that smell really bad and have no circulation. So that's what they want to put the people in and they don't want to move. And right now they they do have their little individual tents but it's been raining off and on and so the tents are totally covered in plastic, which is good for rain but not good when you think about they're sleeping in there. There's no ventilation going to set up, you know, a really bad germ evironment this, it could lead to mold, it could lead to, you know, not enough oxygen in in the tents. You know, so the kids are growing they need they need to be able to breathe.

Can you tell us anything about the I guess they're called tent courts or the immigration process itself there?

Oh, yeah. The tent courts there also are right there by the border. So yesterday, I mean on Sunday as part of the Witness at the Border program. was involved with. We marched over there, they weren't open on Sunday, but we were greeted by Homeland Security guys that have these big vests and big guns. And you know, they've made a stay on the sidewalk and didn't know anything if you ask them a question. And so they go into these courts they have one hour, if they're lucky, and they have no lawyers. And the judge is, I don't know where but far, far away. And so they only see this flat screen TV, you know, that's who they're communicating with. So there's, it's pretty hard for the, for the judge, I would think to even get a sense of who these people are in that way. And one 10th of 1% are being admitted. So that means that they've heard 10,000 cases, and 11 people have been granted asylum. And one man was so distraught last week that he came out of the court and as he crossed the bridge, he cut his throat

Obviously, that's an absolutely terrible outcome. What happens to the other people who have their asylum or immigration cases denied?

They're kind of trapped. They can't go back home. That's why they came here in the first place. I mean, their stories are horrendous. You know, I met a little 14 year old girl who was five months pregnant because of a rape. And that's why they had escaped Guatemala. And in Guatemala, there's no such thing as domestic violence or help for that, you know, and if you call the police and you've been raped, the police will rape you again. I know that people come to the border, they're seeking asylum and these people are doing everything that they're being asked to do. They're totally legal. You know, they're waiting for this metering process, which means they only- only are allowed to seek asylum like maybe five or six for a day for one day and they have hundreds people coming. So they have to wait in line to be able to seek the asylum and then they go into tons of tents and wait again for their court date, which might get changed and they might not find out about it. And if they miss it, that's their chance, it's gone.

So is there anything that our listeners can do to help or get involved or find out more information?

Oh, yeah, I suggest they go to Team Brownsville. They can just look that up on the internet, you know, you can look and you can see what they're doing, how they could donate how they could come down there and help. But you know, you've got to write your senators and your congressmen and just just keep rattling the cages.

This is KBOO reporter Yasemin Cobanoglu speaking with Mariah Carlson