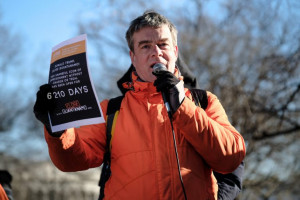 On today's episode Linda Olson-Osterlund will be disscussing Guantanamo Bay with Andy Worthington, call in with your questions!

Andy is a writer, campaigner, investigative journalist and commentator. He is internationally recognized as an authority on Guantánamo and the “war on terror,” and is involved in housing issues in London.

In 2013, in recognition of his work on Guantánamo, he was short-listed for the prestigious Martha Gellhorn Prize for Journalism.

In the 13 years Andy has spent working full-time on Guantánamo and related issues (since he began researching his book The Guantánamo Files in 2006, which was published in September 2007), he has worked as a consultant for the United Nations, as the lead writer on a report on secret detention in 2010, and in a follow-up capacity in 2015.

Andy also worked as a media partner with WikiLeaks, for the release of classified military files relating to the Guantánamo prisoners, in April 2011, which he subsequently began analyzing in depth for an ongoing 70-part, million-word series, “The Complete Guantánamo Files.”

Andy has also been involved with a number of NGOs. In 2011-12, he worked with the New York-based Center for Constitutional Rights on a number of Guantánamo reports. In 2008, he worked for the legal charity Reprieve, and between 2009 and 2011 with Cageprisoners (now CAGE). He has also worked with Amnesty International, primarily in promoting, to student audiences across the UK, “Outside the Law: Stories from Guantánamo,” the documentary film he co-directed with Polly Nash, which was released in 2009.

In January 2012, to mark the 10th anniversary of the opening of Guantánamo, Andy established the campaigning website, Close Guantánamo, with the US lawyer Tom Wilner and with support from a number of prominent lawyers, retired military officials and human rights organizations. He regularly visits the US to campaign for the closure of Guantánamo (and has done since 2008), and he has also traveled to Kuwait, Poland, Norway and the European Parliament in Brussels on Guantánamo-related business. See below for video of him calling for the prison’s closure outside the White House on January 11, 2018, the 16th anniversary of its opening, and see here for video of Andy with Roger Waters on Democracy Now! with Amy Goodman launching a new initiative for 2016, the Countdown to Close Guantánamo. See here and here for the latest photo campaign, and also check out the Gitmo Clock, which counts how long Guantánamo has been open in real time.

END_OF_DOCUMENT_TOKEN_TO_BE_REPLACED

Too Much Information with Abe and Traci
The new new normal