Will the Feds take over Wapato to warehouse the houseless? 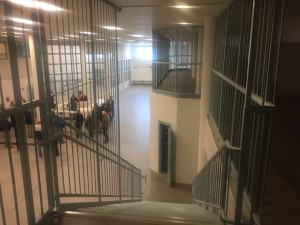 Guests Cory Elia and Andrew Wilkins from Village News on the recent HUD official tour of Wapato and what folks living outside think of the idea.

Join the 3rd Wednesday Portland Assembly crew as they take a deeper look at signals by the Trump Administration indicating that their “solutions to the homeless issue” may be nothing more than incarcerating homeless people. Will Wapato be a model?

Among the many bad signs as to the likely authoritarian turn a Trump policy on homelessness will take is the recent hiring of Robert Marbut, Jr. to head the U.S. Interagency Council on Homelessness, which coordinates initiatives for people without housing across 19 different federal agencies. Marbut, a consultant who’s spent the last decade advising cities on how to manage services for people living in homelessness, believes, against all available evidence, that panhandling is "the gateway to vice."

Trump's special animus towards California has led him to single the state out for harsh criticism on how it handles its houseless population, which has state officials concerned. Apparently, neighboring Oregon should be as well, as Housing and Urban Development Secretary Ben Carson announced a tour of Wapato by regional HUD administrator Jeff McMorris, which took place on December 2.

Update Required To play the media you will need to either update your browser to a recent version or update your Flash plugin.
Download audio file
Topic tags:
Activism, Civil Liberties, Civil Rights/Human Rights, Class, Housing/Homelessness

Thank you. This sure ain't any kinda homework one could expect from Abe & Joe! Very useful to read your preview of tomorrow morning's radio call-in chat. CityLab article\essay always a good primer to get caught up on what the corporate-captured news & private affairs media don't consider newsworthy: Such as HOMELESSNESS!

Homelessness as a coast to coast declared emergency per the mayors of major U.S. cities since the early aughts (and the mayors were late to recognize it would require a national fix, no municipality can handle it without becoming a magnet for the increasing homeless among U.S....) Yet, over the last 3 Presidential Election cycles, including primaries with televised debates, neither of our duopoly political parties have been asked to produce a platform for a national program dealing with the homeless.

For a short while a local alt weekly newspaper ran a semi-regular beat by indie reporter Thacher Schmid appropriately called DOWN & OUT IN PORTLAND:
https://thacherschmid.com/tag/down-out-in-portland/
Even Pamplin the business advertising newspaper chain that includes the PoTown Tribune ran some of Schmid's street level reporting before putting their own remaining reporters on the Hooverville Homeless encampment beat.

I vividly recall some 30 years ago being gifted by an excellent guide to my reading, soon to be an ex (girlfriend) in Texas, with a paperback of George Orwell's memoir of his Post WW I displacement and seeking of work in the ruins and remains of the imperial powers' battlegrounds, DOWN & OUT IN PARIS & LONDON.
https://en.wikipedia.org/wiki/Down_and_Out_in_Paris_and_London

I recall in my 20's and 30's watching the normalization of homelessness in the U.S. once the Soviet Union folded and the Chinese went from Mao to state-sponsored Capitalism faster than you can say Kissinger & Associates or the New Mandarins. With no Cold War v. the Commie Axis there was no more any Washingtonian need to keep up appearances. Coinciding with the House of Reagan-Bush 86'ing from state supported hospitals that had housed or warehoused those among U.S. unable to care for ourselves.

I remember wondering why we couldn't use our "PEACE DIVIDEND" that attended the end of the Cold War and Soviet dissolution of their empire to convert our armories in all major American cities the way armories were used after the first World War in Paris & London & Brussels & Flanders & Verdun & the Austro-Hungarian battlegrounds that benfitted from Russia's Brusilov offensive against the Germans to alleviate the pressure on France and the UK's front. Read Orwell's memoir and find him wandering from city to city seeking any kind of manual labor or kitchen work while sleeping and showering and grooming in the converted European armories set up as combination Homeless Shelters (with the aim of helping the massive internationally displaced find gainful employment)
and what contemporary Seattle Homeless Relief activist Ronni Gilboa pioneered up north in the Emerald City and called URBAN REST STOPS, which so-called Progressive PoTown has never even contemplated establishing:
https://www.thestranger.com/seattle/a-clean-break/Content?oid=490774

That too, was part of the Neo-Liberal E-CON system, with its GREED IS GOOD media meme being spread by Milton Friedman & the U. of Chicago's federally funded academic Cold Warriors on campuses and through mass media to SHRINK BIG GOVERNMENT (except for Daddy Warbucks budgets). Perhaps you are unfamiliar with the Neo-Liberal E-CON Revolution that was Not Televised, even as once Protectionist and America First-ers swapped out their Old School Conservative Republican Identity Labels and obscenely embraced these policies of off-shoring labor to cheap lands, often with tax-payer incentives to U.S. factory owners (see U.S. AID) while lifting trade tariffs and unfettering global capital to invest in dollars anywhere on the Religious Right's God's Earth.

All while our self-labeled Moral Majority set about demonizing the word "LIBERAL" and the concept of "LIBERAL EDUCATION" in favor of the critical mass of institutional corruption that flows so freely from substituting CIVICS classes in public schools with ILLIBERAL EDUCATION. Like the bi-partisan duopoly approved trade deals that screw workers while privileging private investors over the Public Interest in policy-making and legislation. Gil Scott-Heron sang so compellingly of this Revolution that Was Not Televised without ever using the academic economics term Neo-Liberal or differentiating those under either Identity Label of Neo-Con or Neo-Lib, Dem or GOP, Secular Humanist or Religious Doctrinaire.
https://genius.com/Gil-scott-heron-introduction-the-revolution-will-not-...

I only wish you'd have invited to the KBOO studios Multnomah County Commission Chair Deborah Kafoury and her cousin the real estate broker of the Wapato Jail property, Trevor Kafoury, that Multnomah County tax-payers spent some $58 million dollars to construct and beyond that up to $90 million total-to-date dollars to maintain in the intervening decades. Without the facility ever even being used as the Mass Incarceration facility envisioned by local leadership and that it was sold to the voting public for the purposes of back in the flush, financializing while de-regulating and deficit reducing via austerity House of Clinton 1990's.
https://www.oregonlive.com/business/2017/11/multnomah_county_oks_wapato_...

It was recently sold to our Philanthropic Feudal Lords of High Rise Finance and then of HARSCH Commercial Real Estate holdings Marty Kehoe and Jordan Schnitzer respectively for the fire sale price of about $5 million. How's that for "Neo-Liberal E-CON" shepherding of the pauperized PoTown, Ore public assets?
https://www.wweek.com/news/city/2018/04/23/wapato-jails-new-owner-says-h...

I'm due in Eviction Court again in a couple of weeks. Given the day job grind on union contract that clears less than state minimum wage once my UFCW Local 555 negotiated hourly compensation pay-check has union dues deducted, I dream of moving my life's papers, alt journalism and family photos, small PC and roomful of discs that are my audio\music library into a small storage unit along with what little shelving and books I possess and my mattress of the last 13 years. If I didn't have to go out and get an arrest on my record (like poverty and debt obligations, an arrest puts a crimp in any future attempts to be hired for even the most menial of jobs or be considered for renting the most rundown of overpriced units), I wouldn't mind the 3 hots and a Wapato cot (in a private cell).

Instead of the wintry bushes that await me since I have no relations or friends who've already not helped me to the max to stay housed since losing the job that brought me to PoTown, Ore in the go-go early Aughts. Thank you Wells Fargo Card Services for being bailed out by U.S. and instead of using the Bush-Cheney-Hank Paulson of Goldman Sachs turned U.S. Secretary of Treasury TARP bail-out (his son Merrit Paulson got the sweetheart deal to move his Timbers soccer club into the remodeled former Enron Stadium cum former Weld Jen Field cum former Providence Park and once-upon-a-time Civic Stadium) to encourage Too Big To Fail\Jail banks to keep lending to small business and consumers, dear Wells Fargo Supermarket of Financial Services took the public loot and cleared Anti-Trust considerations of breaking up the "bank" to buy a bigger more troubled narco money laundering\de-regulated bank back on the east coast named Wachovia Bancorp. Meanwhile automating both financial supermarkets' now downsized and consolidated credit complaint response case workers whom Wells Fargo Card Services wouldn't train in Consumer Lending regulations to allow for continued personal case work response. Then letting the Escalated Complaint Credit Card business line's customer service be restructured and letting us long-time employees go without so much as severance. And trying to cheat us out of unemployment insurance in Work-At-Will state of Oregon, which is why years earlier Wells Fargo wanted to move our California team of complaint investigators to Oregon, a state with no labor protections to speak of. BOLI requires no reason nor advance notice be given for separating worker\employer: https://www.oregon.gov/boli/TA/pages/t_faq_employmentatwill.aspx

The professional class doesn't like to speak of Oregon's and especially Portlandia's vow-of-poverty or destination of choice for Trustafarians in-migration usefulness in this key part of the Public\Private Financing scheme that is also part of the Neo-Liberal E-CON-o-mics and Global Housing Crisis brought on by financialization; NOT supply & demand or any shortage of newly build housing. The Hoovervilles of Homeless encampments are right outside the security doors of many newly built market-rate condo towers soon converted to rental leases and remaining vacant as they become what CityLab and academics like Prof Saskia Sassen at Columbia U. call "Safe Deposit Boxes in the Sky" meant to be investment instruments for the safe parking of global capital and not meant for inclusing in any global city's housing market:
https://www.youtube.com/watch?v=7Vz2LZYU5c8

Y'know Wachovia Wapato has a nice Corporate Caliphate with trace of indigenous ring to it, if Philanthropist Feudal Lord of High Rise Finance Jordan Schnitz wants to dump the swampy Multnomah bog.