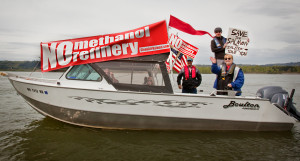 For five years the small Washington state community of Kalama has been grappling with spectre of having the world's largest methanol refinery sited at their port. Northwest Innovation Works, a Chinese-backed company, has been trying with little luck to attain the necessary state permits to begin construction. On November 22, they were dealt their largest setback yet. The Washington State Department of Ecology rejected the Final Supplemental Environmental Impact Statement that Cowlitz County and NWIW had submitted for the required Shoreline Permit. The rejection was based on a series of concerns that opponents of the project have been raising for years: the project's huge carbon footprint and harmful environmental impacts. Ecology questioned Northwest Innovation Works’ claims that the project would result in a reduction of greenhouse gas emissions and asked for a comprehensive and thorough analysis of the project’s global and in-state carbon impact, including an assessment of burning the methanol as fuel. Earlier this month, Northwest Innovation Works and Cowlitz County responded to Ecology by refusing to provide the additional information requested.

So what happens next? On this episode of Locus Focus we talk again with Dan Serres, Conservation Director for Columbia Riverkeeper, about the challenges ahead to stop this project. We also talk with John Flynn, a Kalama resident who has been one of the leaders and spokespeople in the fight to stop the methanol refinery.

Dan Serres works to engage diverse communities along the Columbia. In 2005, he started with Columbia Riverkeeper as the lead organizer in their successful campaign to protect the Columbia River Estuary, forests, and farmland from the Bradwood Landing and Oregon LNG Liquefied Natural Gas (LNG) proposals and their related pipelines. Since 2009, he has filled the role of Conservation Director where his work has broadened to protecting the Columbia River from a barrage of dirty fossil fuel export proposals including LNG export terminals, coal export terminals, oil-by-rail facilities and power plants. Dan is also a member of the Hanford Advisory Board, where he speaks up as a public voice demanding faster and more robust cleanup of North America’s most contaminated nuclear site.

John Flynn retired in Kalama several years ago to enjoy the Columbia River’s outstanding salmon fishing. But for the past five years he’s spent a lot of time fighting the methanol refinery.