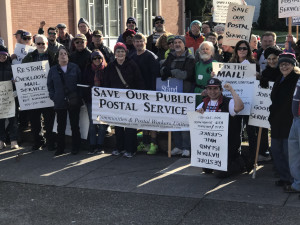 Mail routes have been increasingly inconsistent in the Kenton neighborhood of Portland recently, and a new pilot project is to blame.

On Saturday, residents of the 97217 zip code rallied outside the Kenton Post office to protest the haphazard mail delivery.

The pilot project, called “Consolidated Casing,” was introduced by Postal Service leadership in Washington D.C. in an attempt to speed up mail carriers, reduce the number of mail routes and break up the job into two, those who sort and those who deliver. The project has resulted in residents not receiving their mail on time or at all, and exhausted mail carriers working overtime on routes they are not familiar with.

The issue has gotten the attention of Congressman Earl Blumenauer, who is collecting customer responses to the program to bring to Postal Service leadership in Washington.

KBOO’s SJ Oxendine attended the rally and spoke with Jamie Partridge of Communities and Postal Workers United about the issue.

Postal patrons can email their feedback to blumenauer.casework@mail.house.gov

Update Required To play the media you will need to either update your browser to a recent version or update your Flash plugin.
Download audio file
Topic tags:
Activism, Labor, Evening News