The "Battle of Seattle" 20 Years Later: Globalization, Anarchism and Indymedia 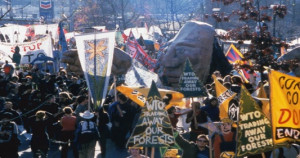 It’s been 20 years since protesters shut down the World Trade Organization in what became known as the ‘Battle of Seattle’. That mass mobilization and protest sparked a global movement to combat corporate trade agreements and colonial funding models.

In late 1999, thousands of young activists filled the streets of downtown Seattle in a massive protest against the World Trade Organization.

They stunned business and government elites around the world with their creative tactics and their use of independent media networks to spread their own global justice message to the public, thus circumventing traditional corporate media gatekeepers.

Today we’ll talk about the movement sparked by the Battle of Seattle, the Indymedia network that formed as a result, and where that movement is at twenty years later.

Update Required To play the media you will need to either update your browser to a recent version or update your Flash plugin.
Download audio file
Topic tags:
Activism, Corporations, Environment/Climate, Global Affairs, Community Building