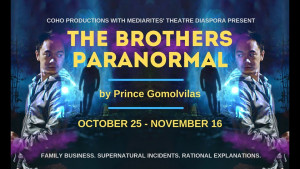 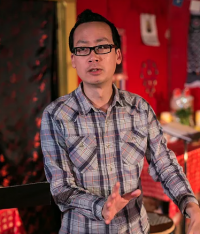 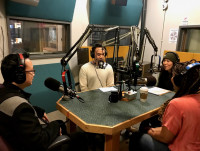 The Brothers Paranormal by Prince Gomolvilas, presented as part of CoHo Season 24, marks the first co-production from MediaRites' Theatre Diaspora, a grassroots project started in 2014 to raise awareness and visibility for Asian American theatre and the stories of underrepresented communities through staged readings and community dialogue. This co-production is both an Oregon premiere and a rolling Pacific Northwest premiere in conjunction with Seattle's Pork Filled Productions. Directed by Catherine Ming T'ien Duffly, with original music composed by violinist-looper-vocalist Joe Kye, and featuring a multiracial cast, The Brothers Paranormal is inspired by the Thai Horror genre and grounded in the humanity of healing after trauma.

ABOUT THE BROTHERS PARANORMAL
Brothers Max (Samson Syharath) and Visarut (Lidet Viravong) launch a ghost-hunting business to capitalize on the nationwide increase in sightings of “Asian-looking ghosts.” When the siblings investigate the home of an African-American couple (Andrea White & Jasper Howard) displaced by Hurricane Katrina and haunted by a terrifying spirit (Melissa Magaña), everyone involved must reevaluate their notions of sanity and superstition to discover the shocking truth. A spooky and heartfelt rolling west coast premiere by self-proclaimed “world’s only Thai-American playwright,” Prince Gomolvilas.

“I’ve always been interested in the tension between what is real and what is not. Not only in terms of the laws of the physical universe but also through the world as we know it: how we perceive things and how other people perceive us. All of my research explores the play’s disparate themes: the trauma of displacement (from one’s country of origin, from post-Katrina New Orleans, from the corporeal world); the high incidence of mental health issues among Asian immigrants; and the different ways in which people cope with incredible loss.” – Prince Gomolvilas

Prince Gomolvilas is a playwright, performer, and educator. He is best known as the world’s only Thai-American playwright. (He challenges you to find another!) His full-length plays include: Big Hunk o’ Burnin’ Love, Seat Belts and Big Fat Buddhas, The Theory of Everything, Debunking Love, Bee, Boyz of All Nationz: The Rise and Fall of a Multi-Ethnic Boy Band, Mysterious Skin, The Fabulous Adventures of Captain Queer, and The Brothers Paranormal. He frequently writes comedies with a supernatural twist, along with the occasional drama to shake things up. Recurring themes include the contemporary Asian-American (and, specifically, Thai-American) experience, the tension between immigrants and their offspring, the intersection of ethnicity and sexual identity, race relations in the United States, the trauma of displacement, the nature of loss and grief, and, in the words of Erasure, “the infinite complexities of love. Prince spent the first part of his thrilling life in Indianapolis, Indiana (where his kindergarten teacher couldn’t pronounce his Thai name “Khamolpat” or his nickname “Bin” and arbitrarily crowned him “Prince”); Bangkok, Thailand (where he learned to eat foods spicy enough to kill most people); and Monrovia, California (where he played with stuffed animals obsessively). After spending 12 years living in San Francisco (where he received his BA in Film and MFA in Playwriting from San Francisco State University), he now lives in the Los Angeles area with his beloved cat, Pork Chop, who has blossomed into somewhat of an Internet sensation. (Seriously.)​ Learn more at princegomolvilas.com