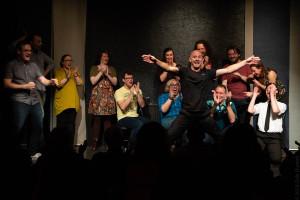 Rahab’s Sisters is a nonprofit which works to serve those marginalized by poverty, houselessness, sex work, violence or substance use.

Every Friday, they open their doors to women and people whose gender identity makes them vulnerable, offering a hot meal, a safe space and radical hospitality.

On Monday, October 21, Portland’s improvisers are coming together to create a night of comedy right on the spot in an effort to raise money for Rahab’s Sisters.