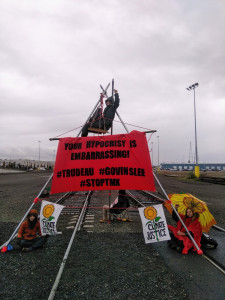 Activist have shut down the Port of Vancouver today to protest the import of Trans Mountain Pipeline Expansion infrastructure through Washington State.

The Trans Mountain Pipeline Expansion would transport tar sands oil across Canada, from the Alberta Tar Sands to the shores of British Columbia, which activists oppose for a few reasons.

For one, the emissions from such a project would be severe, and the pipeline would cross considerable amounts of indigenous land, creating risk for their local waters and way of life.

Just weeks ago, protesters in Portland held a 60 hour vigil to protest Zenith Energy Corporation, which plans to export tar sands by train through Northern Portland.

KBOO’s Althea Billings spoke to one of the Vancouver protest’s organizers, Kelsey Baker.

Update Required To play the media you will need to either update your browser to a recent version or update your Flash plugin.
Download audio file
Topic tags:
Activism, Energy/Natural Resources, Environment/Climate, Government/Politics, Indigenous, Evening News