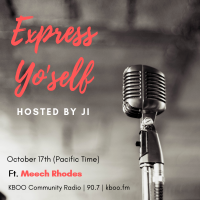 On this episode, Ji interviewed rapper Meech Rhodes about his rapping career in addition to his newly released EP entitled “History in the Making (H.I.T'M)”. His EP can be found on sound cloud, apple music, spotify, google play, youtube and Pandora. Meech Rhodes can be supported on instagram @meechrhodes.

The song playing in the beginning and end of the interview is entitled “Express Yourself” by NWA. The other three songs that played are entitled “Don’t Stop” and “Holy Moly”, by Portland based artists Meech Rhodes, and “Still Not a Player” by Big Pun. The Express Yo'self show can be supported on Instagram @expressyoselfradio.​