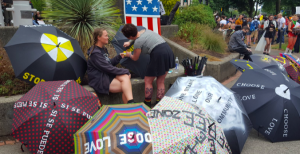 Press**Watch returns, with an interview with the Green Party Presidential Candidate

Join me for a brief peek behind the video veil, and an interview with Green Party Presidential primary candidate Howie Hawkins.

I'm so glad to be back!  I was at the Grass Roots Radio Conference in Rochester, New York.  I also visited the WOOC studios in Troy.

GREEN POTUS CANDIDATE HAWKINS IN SALEM, OREGON TO DISCUSS HOW TO PAY FOR GREEN NEW DEAL


Green Party presidential candidate, Howie Hawkins, will appear in Salem, Oregon on Wednesday, October 16.  Hawkins is the "Original Green New Deal-er" and will be discussing the details of his Ecosocialist Green New Deal, including a $2.7 trillion annual budget.

Hawkins is pleased to see Democratic candidates putting forward climate plans, but none go far enough. Hawkins said, “Even the best plan announced by Senator Sanders, fails to eliminate greenhouse gas emissions fast enough for climate safety. His cuts to the military, the largest climate polluter, are insufficient and vague. I am calling for a 75% cut in military spending to redirect major financial, physical and human resources into the Green New Deal.”

Hawkins, in 2010, was the first US candidate to run on the Green New Deal. The centerpiece of his presidential campaign is an ecosocialist Green New Deal. It calls for social ownership and democratic administration in order to carry through a rapid energy transformation. It calls for socializing key productive sectors, notably energy production, power distribution, railroads, and a domestic manufacturing sector to be rebuilt on a green basis with clean power and zero waste.

“The Green New Deal has been the Green Party’s signature program over the last decade. Sanders’ Green New Deal is the closest version yet to the full Greens’ full program. We’re glad for that. But we need to pick up the pace for zeroing out greenhouse gas emissions. We’re running out of time to avert a climate holocaust,” Hawkins said.