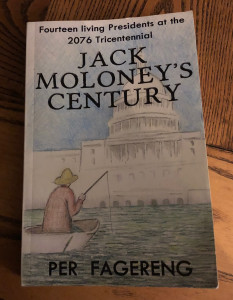 Per Fagereng's novel explores America and Portland after Peak Oil

John Shuck speaks with radio host and author, Per Fagereng, about his novel, Jack Moloney's Century. The novel covers the 100 year life of Jack Moloney (1980-2080) as he moves from Ireland to Portland with many stops along the way through the world's transition from abundant energy to Peak Oil and beyond.

Per hosts the radio show, "Fight the Empire" on KBOO. Per says of himself:

Worked at a gold mine in Alaska and a Norwegian freighter.

Hanging out at a San Francisco tavern got me started in a newspaper career.

I’ve been involved with KBOO since around 1980."

From the back cover of Jack Moloney's Century:

WHAT HAPPENED TO AMERICA? When young Jack Moloney jumped ship in New York in the year 2000 the United States was the world's great power. When Jack died 80 years later the United States was in pieces, and his long life came to an end in a place called Cascadia. Jack Moloney grew up in Derry, in British-occupied Ireland. One night he helped some friends lob a mortar round into an army camp, and the IRA got him out of town. From Ireland to a job on a cruise ship, to New York, Chicago, the Great Plains and Oregon -- Jack lived through a dangerous time in history. Gone were cheap oil, banks and mighty war machines. Now wars were fought by roving bands of armed people on foot. Old nations broke apart and new ones were born in rebellion. Nature itself fought back at human folly. As always, life depended on good land and water, and people to do the work.

When Does Audio Archive this episode Beloved Community Post?

Looking forward to listening to this interview with Per. Thank you for putting valued KBOO longtime broadcaster\public affairs analyst Per Fagereng in the interviewee seat. He's become PoTown's own Studs Terkel thanks to KBOO and his programs like FIGHT THE EMPIRE and PRESS WATCH.

It is now posted. Not sure

It is now posted. Not sure what happened, but it was retrieved. I agree with all of your good words about Per!