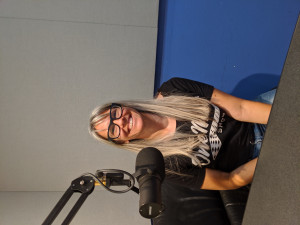 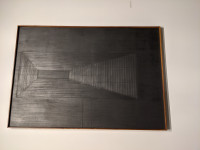 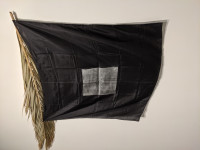 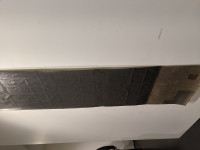 On Tuesday October 8, 2019 at 11:30 a.m. Joseph Gallivan interviews painter Jenene Nagy about her show Box Breathing, which is on now through Nov. 2 2019 at PDX Contemporary Art. Nagy talks about how she makes her “black squares” from torn paper and graphite, as well as her works using palm fronds and paper she made from palm leaves. She explains how “box breathing”, a term from yoga meaning to slowly breathe in and out on a count of four, relates to the focus viewers might have when contemplating her works. Nagy lives in the Inland Empire in Southern California but is a regular artist at PDX in the Pearl District.

Sorry the photos are coming out sideways, I cannot fix this in teh KBOO CMS. :-( Tilt your head!

'Box breathing' is a suite of works that honor the mysterious abundant in the everyday. Hovering, painted squares map and veil the surface of the paper, as nuanced differences are enhanced through repetition. Desire resides in the search; building upon the previous, giving shape to the breath.

My practice relies on the courage to allow the unknown to reveal itself as labor transforms humble materials into ritualized objects. In the making, paper becomes the mark, and cast off fallen palm fronds are given a new life by becoming the ground and support for paintings. Palm Flag (black square) serves as a bridge between these two bodies of work. It is an object that stakes claim to a chosen and cultivated path, a symbol of a commitment to living in this world with an open mind and a generosity of spirit. Grounded in a material presence, while suggesting something other, the artworks are a record of seeking the slightly out of reach, the waiting to be discovered.