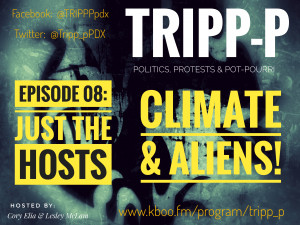 Hosts Cory & Lesley sit down to discuss the Global Climate Strike Movement inspired by 16 year old Swedish Activist, Greta Thunberg, and the impact that the youth of today are having on addressing climate change - such as with the lawsuit Juliana v. the United States.

A list of possible theories behind the mysterious cattle deaths in Eastern Oregon includes Vegans, Cultists, and Aliens;

The story behind the "Raid Area 51: They Can't Stop Us All," event in Rachel, Nevada that was planned to take place on Saturday September 21st, 2019;