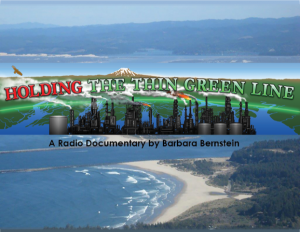 As the fossil fuel industry increases pressure to turn the Pacific Northwest into a fossil fuel hub, a Thin Green Line stands in its way. Now that communities across the region have stopped numerous coal and oil projects, the industry is pushing even harder to build the West Coast’s largest liquid natural gas (LNG) export terminal in Coos Bay, Oregon, a massive LNG hybrid facility at the Port of Tacoma and the world’s largest methanol refineries in Kalama, WA and Clatskanie, OR.

HOLDING THE THIN GREEN LINE is a four part radio documentary that tells the stories of people fighting to save the souls of their communities and preserve the integrity of the Pacific Northwest. The first half-hour, The World’s Largest Methanol Refinery, follows the efforts of activists in Tacoma and Kalama, Washington, to stop the world’s largest methanol refinery from being built at their ports. Tacoma successfully blocked the refinery at their port, but the struggle in Kalama continues.

The second half-hour, A View from the Blast Zone, tells the saga of Puget Sound Energy’s effort to build an LNG facility at the Port of Tacoma, vehemently opposed by citizens across the region.

The third and four segments, which will be heard next week, tell the story of Jordan Cove, what would be the largest LNG export terminal on the West Coast, proposed for Coos Bay, Oregon, and accompanied by a 240 mile pipeline crossing much of Southern Oregon, disturbing nearly 500 rivers, streams and wetlands in its wake. For fifteen years community members, landowners and indigenous people have organized and raised their voices to stop this assault on their home, communities and land.

Visit the HOLDING THE THIN GREEN LINE website to for more information about how to hold the thin green line.