11/9 and The Terrorist Who Loved Bonsai Trees 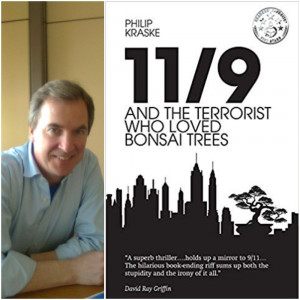 A fictional story about a false flag terrorist plot to lead the US to war. Sound familiar?

John Shuck speaks with Philip Kraske about his fifth novel, 11/9 and the Terrorist Who Loved Bonsai Trees.

"Trudy Schelling arrives at her company in Jersey City, New Jersey, to start her first day of work at Hallerbee Net Research. The date is November 9. Barely through the door, she is grabbed by a man in military garb - one of several in the brownstone townhouse - but fends him off and manages to escape. Twenty minutes later, six terrorists, fleeing their botched job of planting a miniature atomic bomb in the Empire State Building, screech to a halt in front of the same townhouse, three police cars on their tail. The terrorists run inside, and a hostage standoff ensues, the dozen hostages ostensibly being Hallerbee employees.

Pursued through the streets of Manhattan, Trudy knows that the attack is a false-flag operation. In a matter of hours, she is portrayed in the media as the seventh terrorist of the group, and the entire country is baying for her blood. Her only hope is Paul Klippen, a State Department official whose lonely task is to expose the lies about her and stop war between the United States and Iran."

"Most of us who continue to do research on 9/11 focus primarily on the question of what really happened that day. There will eventually be a definitive answer to that question that can be summarized in a few pages. But what is the meaning of 9/11, what are its implications? Philip Kraske's superb thriller, 11/9 and the Terrorist Who Loved Bonsai Trees, as the title implies, holds up a mirror to 9/11, providing a way of understanding this horrendous event. The hilarious book-ending riff of Trudy's comedian boyfriend sums up both the stupidity and the irony of it all.

Philip Kraske was born in Detroit, lived his formative years in Ohio and Minnesota, and stayed in America long enough to get in the basic rituals of high school and college. He graduated from the U of Minnesota/Twin Cities with a B.A. in International Relations. He settled permanently in Madrid in the 80s.