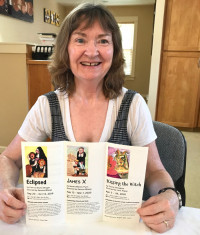 Dmae features the seventh season of Corrib Theatre's focus on  plays by contemporary Irish playwrights. We'll talk with founder and artistic director Gemma Whelan about the upcoming season that includes Eclipsed by Patricia Burke Brogan, James X by Gerard Mannix Flynn, and Kissing the Witch by Emma Donoghue. We'll hear about the horrific history of unwed mothers at the Magdalene laundry and how religion and government colluded to deny reproductive freedom. And Gemma tells us how Corrib Theatre embraces inclusion with Eclipsed--the season opening play.

ABOUT THE PLAYWRIGHT
Patricia Burke Brogan is an Irish playwright, novelist, poet, and artist. Eclipsed was one of the first plays to tell the story of the Magdalene Laundries and was inspired by Patricia's experiences as a young novitiate. The play was first produced at Punchbag Theatre Company in 1992, and has since won many awards, including a Fringe First at Edinburgh Theatre Festival (1992), and the United States Moss Hart Award (1994). To date, there have been 61 productions of Eclipsed on three continents, but the work was not always so well received, being initially rejected by all of the main theatre companies, who said it was too controversial. Burke Brogan continued to write two more plays, Requiem of Love and Stained Glass at Samhain (2002), and has also released a number of poetry collections including Décollage New and Selected Poems (2008).

Corrib Theatre offers season subscriptions for the 2019–20 host of plays, available through the website now. General admission tickets are $30, 35 and under are $20, and groups are $25. Corrib accepts discounts for Work for Art and Chinook Book, and participates in Arts for All.

ABOUT CORRIB THEATRE
Corrib Theatre engages, inspires, entertains, and challenges audiences with theatrical productions with a focus on contemporary issues and universal themes written by Irish playwrights. We foster a diverse theatre community in our artists and patrons, and celebrate the essential power of the theatre to illuminate our common humanity.

Update Required To play the media you will need to either update your browser to a recent version or update your Flash plugin.
Download audio file
Topic tags:
Arts/Culture, Women
Genre(s):
Arts and Culture