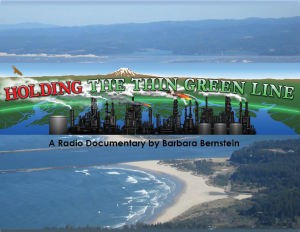 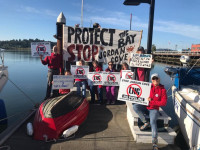 THE LONG AND TWISTED TALE OF JORDAN COVE tells the story of what could be the largest Liquid Natural Gas (LNG) export terminal on the West Coast. This mammoth facility, proposed for Coos Bay, Oregon, would be fed by a 229 mile long, 36" wide pipeline transporting fracked gas across four counties in Southern Oregon. It would cross much of Southern Oregon, disturbing 480 rivers and streams in its wake. For fifteen years community members, landowners and indigenous people have organized and raised their voices to stop this assault on their homes, communities and land. THE LONG AND TWISTED TALE OF JORDAN COVE, part two of HOLDING THE THING GREEN LINE, depicts this struggle and the amazing resistance it has spawned. It tells up close and personal stories of people fighting to save the souls of their communities and preserve the integrity of the Pacific Northwest.

HOLDING THE THIN GREEN LINE is written, narrated and produced by Barbara Bernstein, who also composed the music. Flute music was composed and performed by Doc Slyter. Renew my Hope was writting and performed by Alder Manning. Editing consultants were Melissa Marsland, Patsy Kullberg and Lisa Rudman. The program was funded by the Regional Arts and Culture Council, the Fund for Investigative Journalism and Steven and Jan Marx. Special thanks to Columbia Riverkeeper, Rogue Climate, Power Past Fracked Gas, Allie Rosenbluth, Dan Serres and Larry & Sylvia Mangan.

Visit the HOLDING THE THIN GREEN LINE website to for more information about how to hold the thin green line.