There Is No Liberation Until The Borders Are Gone: Bruno from CIMA and Members of IAF Speak 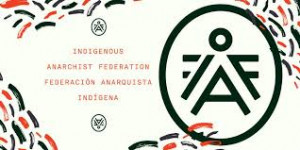 Bruno from CIMA talks about how to get involved in resistance to deportations. Then insurgent e and Bombshell of Indigenous Anarchist Federation about IAF-FAI & indigenous anarchism.

There Is No Liberation Until The Borders Are Gone: Bruno from CIMA and Members of IAF Speak

This week we are super pleased to share an interview that William did a few weeks ago with two members of the Indigenous Anarchist Federation, Bombshell and insurgent e! We got to talk about a lot of topics in this episode, which was recorded on about the year anniversary of the formation of the Indigenous Anarchist Federation. Bombshell and insurgent e talked about their histories as anarchist people, about the formation of this Federation, what true decolonization of anarchism could look like, and about the upcoming Indigenous Anarchist Convergence which is happening from August 16th-18th in Kinlani, Navajo land, occupied Flagstaff AZ, plus many other topics!

If you do the Twitter follows, just note that there is an active fake account that is attempting to badmouth and discredit the work of the IAF, and this account has the handle @fai-mujer; their interventions have been confusing to followers of the IAF in the past. To see a full account of this situation, plus of course many more topics that are like not about internet trolls but are about the work, you can visit them at iaf-fai.org! To learn more about the Convergence, to register, and for tips for outsider participation, you can visit taalahooghan.org.

more links and further reading below...

But first up Bursts spoke with Bruno Hinojosa Ruiz of the local immigrants advocacy group, CIMA, about the threatened raids by ICE and  CPB, ways for folks to get plugged in wherever they are with defending  their communities and helping those most targeted and strengthening our  bonds. More about CIMA can be found online by searching C I M A W N C on  facebook or at their site cimawnc.org. After the conversation,  Bursts learned that there’s a wiki page that’s compiling ICE offices and companies profiting from Immigrations police and Border Patrol. That  wiki can be found and added to at https://trackingice.com/wiki/Main_Page

If in listening to this you are curious about whose land you were born on or live on, a fantastic resource for this is native-land.ca which provides a world wide map, insofar as it’s possible, of indigenous lands and the names of their people spanning thousands of miles.

For more great interviews with members of IAF, including words from Bad Salish Girl and Green City:

-Do some digging and research to find a bunch of recent authors who have done the work to center Indigenaity and decolonization,

-read the complete works of Cutcha Risling Baldy on Decolonized and Indigenous Feminism,

-Talk to and listen to Indigenous people, do the necessary research to not ask folks to perform unnecessary emotional labor.

Indigenous Peoples History of the United States by Roxane Dunbar-Ortiz

1491: New Revelations of the Americas Before Columbus by Charles C. Mann

Our History Is The Future by Nick Estes

Some good podcasts, recommended by William of TFS, from Indigenous folks, while not being politically anarchist identified are good to listen to!

All My Relations by Matika Wilbur and Adrienne Keene

While Indigenous by the NDN Collective

Stay tuned next week for an interview with Kanahus Manuel, a Secwepemc woman fighting a pipeline thru her lands in so called BC!

In related news to the ramping up of ICE repression of people around the so-called US, protests, sit-ins and sabotages of profiteers have been on the rise. Much of this can be tracked by visiting https://itsgoingdown.org/closethecamps/. Of note, in Asheville someone claimed responsibility for damaging an atm owned by PNC and claiming it anonymously on IGD.
Also, on Saturday, July 13th, a 69 year old, northwest anarchist named Willem Van Spronsen was gunned down by authorities outside of the North West Detention Center in Tacoma, WA while attempting to destroy buses used by GEO group to transport detainees to and from the center. Van Spronsen was allegedly armed with a rifle and  was attempting to arson the buses when pigs opened fire and ended his life. There’s a statement by a local group focused on shutting down the facility, La Resistencia, up on fedbook and linked in our show notes. We’re sorry to lose you,  comrade and mourn your loss, but are inspired by your motivation.

Music for this episode:

Affinity by Shining Soul off of We Got This

Look of Pain by Soul Position

Update Required To play the media you will need to either update your browser to a recent version or update your Flash plugin.
Topic tags:
Immigration, Indigenous, Race, Community Building