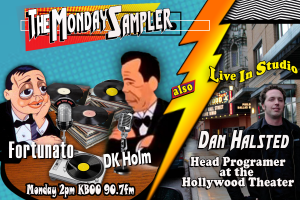 More music and crazy fun as The Sampler Crew returns for another Monday afternoon. Just Jess is still between dimensions searching for our missing fan girl at large Godiva Lee, who mysteriously disappeared last June. And PBK has been called away on a last minute, top secret assignment. So, it's just Fortunato and DK Holm in the tree house today.  Joining us will be Dan Halsted, head programmer at the Hollywood Theater. who will fill us in on the up coming premier of the new Tarantino film, Once Upon A Time In Hollywood, coming to the Hollywood Theater. We'll be sure to play a much of music from his films and get into some serious film nerd talk.

Update Required To play the media you will need to either update your browser to a recent version or update your Flash plugin.
Topic tags:
Arts/Culture, Music
Genre(s):
Arts and Culture, Eclectic