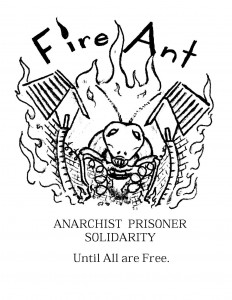 In this June 11th special, we’re releasing an interview with some anarchist prisoners in the so-called U.S. and some of the folks who support them.

First up, Sean Swain shares his views on Fire Ant and prisoner support. [2min 20sec , followed by Surrounded by Matador from the album The Taking, Black Powder Records]

Then we hear Michael Kimble sharing his views on the publication and recent experiences in the Alabama prison in which he’s held, which was a part of the interview we aired with Michael a few weeks back. [10min 56sec, followed by The War On The Imagination by Sole from Let Them Eat Sand]

After Michael speaks, a supporter and partner of Eric King talks about their impressions of the impact of June 11 and Fire Ant on their partner’s life. We’ll be sharing more from Eric’s partner in coming weeks about his situation, changes coming in the BOP and about the types of support federal prisoners and their supporters need. [42min 52sec]

After the Eric section, we are happy to share a musical track by the project, Realicide, called “Decide Today = Free Marius Mason” about the long-standing Earth Liberation, anarchist, Animal Liberation prisoner. There’s a link to youtube for the audio in our show notes.

Finally Robcatt, one of the folks on the outside shares some of the history of Fire Ant zine, some of his past support experience and a provocation on how we as anarchists need to shift how we do support work. [52min 17sec]

You can find issues of Fire Ant, which are written and adorned by anarchist prisoners, at the website for Bloomington ABC and for a list of June 11 events around Turtle Island, check out https://itsgoingdown.org.

Other music in this episode:

Update Required To play the media you will need to either update your browser to a recent version or update your Flash plugin.
Topic tags:
Activism, Government/Politics, History, Prison