“We of this bread will not eat any more”: Anarchist Prisoners in Italy on Hunger Strike 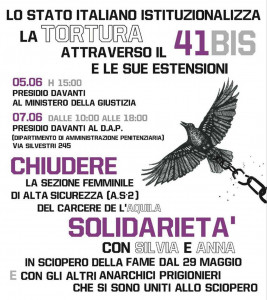 In this minisode special, Bursts spoke with an anarchist comrade in Rome about the hunger strike initiated on May 29th by Anna and Silvia, two anarchists rounded up in police actions (Anna in Operazione Scripta Manent and Silvia in Operazione Scintilla) and still facing trial for accusations of participating in direct action against the state and its borders. The hunger strike is against the solitary nature of their incarceration and it’s impacts on other prisoners.

Silvia Ruggeri and Anna Beniamino are being held in a prison condition called AS2 (High Security 2) at L’Alquila prison in the center Italy, the only two women in this section of the prison. Here is a link to a translated letter from them. As if the high security level weren’t harsh enough, the AS2 in L’Alquila in reality matches the application of what’s known as 41bis, invented by the Italian state during the Years of Lead (Italian civil war during the mid 70’s) and housing mostly accused political radicals, mafia foot-soldiers and jihadists.

41bis was implemented as an emergency measure and kept on the books, the kind of State of Emergency that Agamben writes about, staying on as a torture regime that now houses nearly 750 prisoners, tightens every year. 41bis has provoked protest from human rights groups, the European Court of Human Rights, the California legal system (which refused to extradite the mafioso Rosario Gambino to Italy for fear of subjecting him to torture under 41bis) and soliciting protest and solidarity on the outside. The twitter account of the @YPJInternational put out a statement of solidarity with Silvia and Anna and protests have occurred around Italy and in other countries, and comrades in Italy hope to hear about more solidarity.

More direct info on the case can be found at https://www.inventati.org/rete_evasioni/, where you can also share your solidarity actions.

Besides the links above, Round Robin is another site that will likely carry updates translated into English on the case of Silvia and Anna moving forward.

The musics heard in this minisode are:

Update Required To play the media you will need to either update your browser to a recent version or update your Flash plugin.
Topic tags:
Activism, Prison, Global Affairs