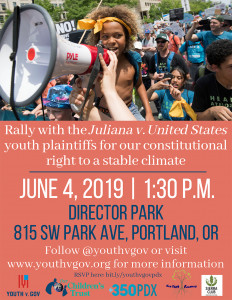 Juliana v. United States, a lawsuit brought by young plaintiffs between the ages of 11 and 23, asserts that the U.S. government, through its affirmative actions in creating a national energy system that causes climate change, is depriving them of their constitutional rights to life, liberty, and property, and has failed to protect essential public trust resources. The case is one of many related legal actions brought by youth in several states and countries, all supported by Our Children’s Trust, and all seeking science-based action by governments to stabilize the climate system.

After clearing several pivotal legal hurdles in the Oregon District Court, Juliana was supposed to begin trial on October 29, 2018 in Eugene, Oregon. However, the case is now pending before the Ninth Circuit Court of Appeals, which granted the Trump administration’s petition for permission to bring an early appeal in the case. In January, the three-judge panel granted plaintiffs’ request to expedite the briefing schedule in Juliana, which put the appeal on a fast-track. The Court will hear oral arguments on the interlocutory appeal on June 4, in Portland, Oregon.

On this episode of Locus Focus we talk with Danny Noonan, a lawyer at Our Children's Trust; Vic Barrett, one of the plaintiffs and Amanda Hendrickson, a Lewis & Clark student organizer, will talk about the case and the upcoming hearing and rally on June 4.

Over 1,000 people will join together on the morning of June 4th at Directors Park in downtown Portland to rally in support of the youth plaintiffs and the science-based climate recovery plan they seek. Many of those attending the rally will be students of all ages, coming from all over Oregon and Washington. This rally will be fun, educational and safe. There will be youth-led music, scripted theatrical performances, the opportunity to silkscreen clothing, beautiful art and art demonstrations, and a press conference featuring the Juliana plaintiffs and various community leaders.

Our Children’s Trust is a nonprofit organization, elevating the voice of youth, those with most to lose, to secure the legal right to a healthy atmosphere and stable climate on behalf of present and future generations. We lead a coordinated global human rights and environmental justice campaign to implement enforceable science-based Climate Recovery Plans that will return atmospheric carbon dioxide concentration to below 350 ppm by the year 2100. www.ourchildrenstrust.org/

Update Required To play the media you will need to either update your browser to a recent version or update your Flash plugin.
Download audio file
Topic tags:
Activism, Civil Rights/Human Rights, Environment/Climate