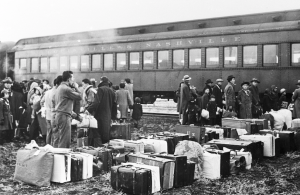 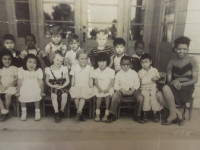 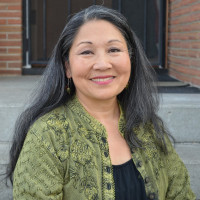 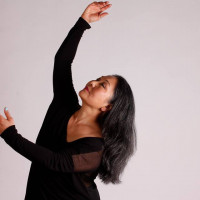 Dmae talks with activist, choreographer and dancer Chisao Hata who debuts a performance piece called GAMBATTE: An American Legacy at the Vanport Mosaic Festival which currently has events throughout Portland and runs through June 5th. GAMBATTE, a Japanese phrase that roughly translates to “do your best” and “hang in there,” began as staged reading at Vanport Mosaic and has evolved into a 90-minute piece that will debut June 1-5 at the festival. We'll hear about the show as well as highlight other events at the festival. See the complete schedule at VanportMosaic.org.

For the last four years, the Vanport Mosaic Festival offers performances, films, talks and exhibits about Portland’s history with displacement, gentrification and little-known stories of communities of color here. The  multi-disciplinary festival first began as way honor and preserve the history of Vanport, a city between Vancouver and Portland built for Kaiser shipyard workers during WWII.

At its height Vanport house 40,000 residents, many of them African American and Japanese American returnees from incarceration. In 1948, a devastating flood washed away almost all traces of the city. Vanport Mosiac still gives voice to the Vanport story but also has broadened its festival to include what they call “memory activism” about Portland’s “silenced histories.”

This year the festival runs through June 5 with events throughout Portland. In early June, Portland dancer and activist, Chisao Hata debuts a performance piece called GAMBATTE: An American Legacy at the festival. GAMBATTE, a phrase that roughly translates to “hang in there,” began as a shorter staged reading in collaboration with playwright Nikki Nojima-Louis at the festival and has evolved into a 90-minute piece with movement that will debut June 1-5.

As a Sansei (a third generation Japanese American) performing artist,  Chisao Hata has created many performance pieces, worked for redress for losses incurred during WWII and participated in pushing for a Presidential Medal of Freedom for noted civil rights hero and Hood River lawyer Minoru Yasui.

For the last two years, Chisao has been working on GAMBATTE: An American Legacy that explores the history of Portland’s Japan town (Nihonamachi) before Executive Order 9066 requiring forced removal, the camp experience, the civil rights era for Asian Americans in the 70s and to the present.

Gambatte: An American Legacy Presented as a part of the Vanport Mosaic Festival, 2019

THE VANPORT MOSAIC FESTIVAL highlights include:

Divided States: the 2017 MAX Train Attack - Friday May 31st.Interstate Firehouse Cultural Center Thur, May 30 at 7-9pm
On May 26, 2017 a white supremacist fatally stabbed two people and injured a third, after he was confronted for shouting racist and anti-Muslim slurs at two teenage girls on a MAX Light Rail train in Portland. This documentary screening commemorates the 2-year anniversary of this tragedy.

TOUR
Power to The People: Black Panther Legacy Tues May 28 at 1-3pm. Northeast Coalition of Neighborhoods 4815 NE 7th Ave Portland. Join Kent Ford, founder of Portland's chapter of the '60s-era black empowerment organization, for a walking tour in NE Portland. Listen to his personal memories of revolutionary activism and community service, and be inspired for today’s fight for change.

EXHIBITS
Building Memories: Recent Watercolors by Henk Panders at Cerimon House. Originally from the Netherlands, Henk Pander was a child during WWII. Since immigrating to the PNW in 1965, he has become one of the region’s most renowned artists. This series of large format watercolors about the Vanport Flood and Nazi-occupied Amsterdam invites us to reflect on the invisible histories held by buildings, streets, and empty places.