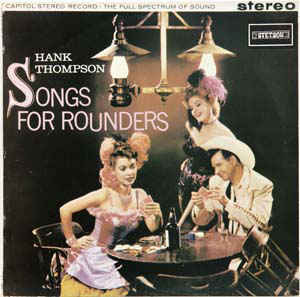 In a world of well manicured lawns, white picket fences and men in gray flannel suits Hank Thompson released his 1959 album "Songs For Rounders." He rounded up a bunch of songs from the wild side of life- tales of drunkenness, gambling, prostitution - and recorded them in stereo. Add to that a notorious album cover and the LP was considered controversial at the time. Tune in Saturday morning to see what all the fuss is about. Mary Rondthaler will be joining me as well to talk about her new release. That's Swing 'n' Country 6-9 am on your community radio. 90.7 fm or KBOO.fm.

Update Required To play the media you will need to either update your browser to a recent version or update your Flash plugin.
Topic tags:
Music
Genre(s):
Country