Joseph Gallivan interviews Grace Kook-Anderson, Curator of Northwest Art at the Portland Art Museum, about The Map is not the Territory, 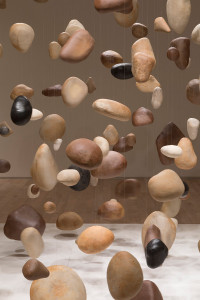 Joseph Gallivan interviews Grace Kook-Anderson, Curator of Northwest Art at the Portland Art Museum, about The Map is not the Territory,

On Tuesday April 30, 2019 at 11:30 am Joseph Gallivan interviews Grace Kook-Anderson, Curator of Northwest Art at the Portland Art Museum, about The Map is not the Territory, an eight-person who which closes Sunday May 5 2019.

Kook-Anderson talks about each artist and how they relate their materials and stories to identity.

The map is not the territory is part of a triennial series featuring regional artists exploring place and boundaries. This inaugural exhibition focuses along the eastern edge of the Pacific Ocean stretching from Oregon through Washington and Vancouver, B.C., up to Alaska. The artists in this exhibition seek to reconceive and reimagine the Northwest. What does it mean to make art in this region today, and what are the immediate inspirations and pressing concerns that drive each artist’s work?

Through a culmination of studio visits, conversations with the artists, and shared readings, connective themes have surfaced for this exhibition. The map is not the territory is a generative conversation about our connections to the land, efforts toward decolonization, bringing indigenous values to the forefront, and a celebration of the region’s kinship. The artists in the exhibition are Annette Bellamy, Fernanda D’Agostino, Jenny Irene Miller, Mary Ann Peters, Ryan Pierce, Rob Rhee, Henry Tsang, and Charlene Vickers.

Geography connects the artists, but so does a deep sense of place and displacement in a moment when the effects of global climate change create a more urgent reconsideration of systemic values. While Bellamy responds directly to the land and ocean defined by her commercial work, D’Agostino and Peters point to severe moments of disconnect. Miller works to decolonize sexuality through the process of photography and narrative, asking, “How do we as indigenous people decolonize our sexualities, genders, and the way we treat individuals who identify outside of the standard binary male or female?” Tsang works closely with the Chinook Nation to revisit the 1851 Tansy Point Treaty, which was signed in good faith but never ratified by the federal government. To this day, the Chinook Nation is still striving to achieve official recognition. Vickers, despite a long residence in Vancouver, British Columbia, creates installations and performances that expose deep connections to her home and family of Ojibway ancestry, entwining healing body processes closely tied to her homeland. Pierce and Rhee speak to a resilience found in elements in nature that thrive and hold longevity beyond human time.

The exhibition title, the map is not the territory, derives from a remark by philosopher Alfred Korzybski, expressing the essential distinction between an object and its representation—or, more broadly, between our beliefs and the underlying reality. Through the field of general semantics, Korzybski’s intent was to improve the ways people interact with one another and the environment, particularly through critical use of words and other symbols in connection to our living experiences. In this vein, each artist has expanded their own practice and ideas while engaging with each other in preparation for the map is not the territory.

A catalogue will also be published in conjunction with the exhibition, featuring an essay by the curator, as well as essays from Sasha Archibald, Demian DinéYazhi’, and Ashley Stull Meyers to further expand on these broader exhibition themes.

The next exhibition in the series in 2022 will examine the interior regions of Wyoming, Idaho, Montana, and eastern Oregon and Washington.

Organized by Grace Kook-Anderson, The Arlene and Harold Schnitzer Curator of Northwest Art, in collaboration with the Museum’s education department.