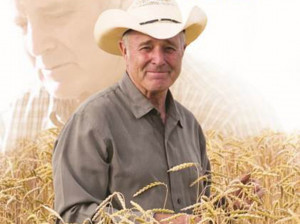 When Bob Quinn was a kid, a stranger at a county fair gave him a few kernels of an unusual grain. Little did he know, that grain would change his life. Years later, after finishing a PhD in plant biochemistry, Bob began experimenting with organic wheat on his family’s farm in Montana. What happened next is a story that can bring real change to our dinner plates and to our communities.

On this episode of Locus Focus we talk with Bob Quinn and his writing collaborator Liz Carlisle, who tell the story of Bob's sojourn into growing organic food in their book Grain by Grain, A Quest to Revive Ancient Wheat, Rural Jobs and Healthy Food.

Bob Quinn is an organic farmer near Big Sandy, Montana, and a leading green businessman. He served on the first National Organic Standards Board, and has been recognized with the Montana Organic Association Lifetime of Service Award, The Organic Trade Association Organic Leadership Award, and Rodale Institute’s Organic Pioneer Award. His enterprises include the ancient grain business Kamut International and Montana’s first wind farm.

Liz Carlisle is a Lecturer in the School of Earth, Energy, and Environmental Sciences at Stanford University. Her first book, Lentil Underground, won the Montana Book Award and the Green Prize for Sustainable Literature.

Update Required To play the media you will need to either update your browser to a recent version or update your Flash plugin.
Download audio file
Topic tags:
Agriculture, Environment/Climate