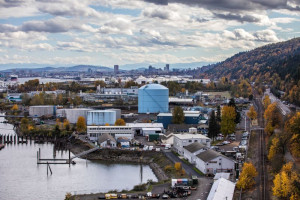 A “Sacrifice Zone” is a place where dangerous pollution, waste and “undesirable impacts” of urban living is deposited, creating a myth that the land is not valuable and that no one of importance lives there. In the years, since Lewis and Clark, made their way up the Willamette River and camped where is now the Toyota Yard, the city of Portland annexed the independent towns of Albina, Linnton and St Johns, then proceeded to place the city dump, sewer system, most of Oregon’s fossil fuels and railroad yards in these small river communities. Over 60, 000 houses were destroyed and the communities were re-zoned heavy commercial.  What was once a series of thriving river, wetland, and forest communities has become an Industrial Sanctuary, which means that the businesses are protected from having to obey common laws and have free range to pollute the air, water and forest. These laws and zoning codes contribute to climate change and a disproportionate level of health problems for the residents.

On this episode of Locus Focus we talk with Sarah Taylor, a long time resident of the Linnton neighborhood and co-founder of the Environmental Middle School, a public school dedicated to social and environmental justice through place based, service-learning.   Currently Sarah volunteers, as a midwife, in Haiti and advocates for the lost history of Portland’s sacrifice zone.

Update Required To play the media you will need to either update your browser to a recent version or update your Flash plugin.
Download audio file
Topic tags:
Activism, Civil Rights/Human Rights, Energy/Natural Resources, Environment/Climate, Government/Politics