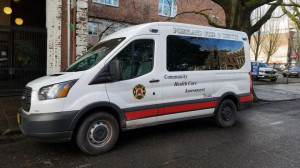 Read the article "If not 911, this is who responds to Portland street homelessness" from Street Roots

Update Required To play the media you will need to either update your browser to a recent version or update your Flash plugin.
Download audio file
Topic tags:
Civil Rights/Human Rights, Police

Thank you Commish Hardesty for inviting today's guests who help make STREET ROOTS such a unique and vital contribution to our local alternative newspapers and 'zine scene. Truly journalism from the ground up rather than the corporate-captured trickle down variety of their Neo-Liberal E-CON con competitors for PoTown's ears and eyeballs.

On the air they cited a figure I've also heard on KBOO's Wednesday Morning Talk Radio hosted and produced by news staffer Paul Roland. Roland recently did a program on RENT SPECULATION inviting guests from Portland Assembly (activist group, not legislators) such as Jonathan Ogden who also mentioned what your guests mentioned today: That there are 16,000 vacant newly constructed or modified apartment units while our un-sheltered homeless figure per capita far outpaces the other 49 states...

From today's PoTown Trib (a Pamplin paper that took the legal advertising from the once daily state-wide OREGONIAN newspaper, so clearly their business model is based on business and not the readers who get their street edition and online Pamplin Papers for free, so, like our Founding Fathers, no friend of the property-less...)
https://portlandtribune.com/pt/9-news/422536-327587-report-oregon-far-ex...

Can you cite where the figure your guests and Paul Roland's guest cited of 16,000 current vacant newly built or modified apartment units too high priced for what the local PoTown rental market will bear?

I don't doubt the veracity, however, as a newshound and curator of a Media Discussion List via email newsletter it provokes the question why such a number is not part of the ever increasing coverage of the HOMELESS\RENTERS CRISIS COAST TO COAST as declared by mayors of many U.S. cities going back at least a decade?

Also, why when Housing Commissioner Dan Saltzman lost his re-election bid to current Commissioner Hardesty, no mention was made of the figure of homeless compared to the boom in new and modified unit construction former Commish Saltzman facilitated often with Public\Private Partnerships of tax-payer subsidies and stimulus? Also, why never a post mortem cost\benefit analysis of how these Neo-Liberal E-Con cons like Public\Private partnerships pan out?

Market rate construction which clearly exceeds market demand given the Wage Stag-Flation for Wage Slaves who remain voiceless and not covered on our Public or Commercial Airwaves and the Deflation in all sectors of the Global Economy except for the rentier class who've clearly raised rents beyond what the market will bear...

Keep on doing and being specific in citing
your sources, we need the best possible ammo to
keep from hitting the safety-net-less pavement just like
our less fortunate faster falling brothers, sisters and homeless families...