Did the CIA Kill Thomas Merton? A Conversation with Hugh Turley 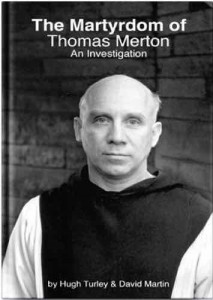 (This episode would have aired Friday March 8th, 2019 but it was International Women's Day and all programming that day was hosted by women. The alternative air date for the March 8th show is Monday, March 18th, at 11:00 am Pacific. The Beloved Community will return to its regular time, every second Friday at 9 am on Friday April 12th at 9 a.m.

During the first few minutes I offer an update on the cancellation of my interview with Kevin Barrett by management and my appeal to that decision, still in progress after a year.​)

Hugh Turley returns to the Beloved Community to discuss his work uncovering the mystery of Thomas Merton's death, December 10th, 1968 in Bangkok, Thailand. Thomas Merton was an intellectual, a prolific writer, and spiritual leader in the anti-war movement of the 60s. While biographers have all accepted the official story in some incarnation or another, that he was accidentally killed by a fan, Turley and co-author David Martin, in their book, The Martrydom of Thomas Merton, show that this official story cannot possibly be true.

Now that this book has been released and official organizations connected with Merton are aware of this work, what is surprising is how so many of those who admire Merton care so little about honestly exploring the truth surrounding his death.

On a special time, Monday, March 18th at 11 am Pacific, John Shuck speaks live with Hugh Turley about the facts around the death of Thomas Merton and the struggles Turley and Martin have had in communicating their findings to the public.

Seldom can one predict that a book will have an effect on history, but this is such a work. Merton's many biographers and the American press now say unanimously that he died from accidental electrocution. From a careful examination of the official record, including crime scene photographs that the authors have found that the investigating police in Thailand never saw, and from reading the letters of witnesses, they have discovered that the accidental electrocution conclusion is totally false. The widely repeated story that Merton had taken a shower and was therefore wet when he touched a lethal faulty fan was made up several years after the event and is completely contradicted by the evidence.

Hugh Turley and David Martin identify four individuals as the primary promoters of the false accidental electrocution narrative. Another person, they show, should have been treated as a murder suspect. The most likely suspect in plotting Merton's murder, a man who was a much stronger force for peace than most people realize, they identify as the Central Intelligence Agency of the United States government.

Thomas Merton was the most important Roman Catholic spiritual and anti-warfare-state writer of the 20th century. To date, he has been the subject of 28 biographies and numerous other books. Remarkably, up to now no one has looked critically at the mysterious circumstances surrounding his sudden death in Thailand. From its publication date in the 50th anniversary of his death, into the foreseeable future, this carefully researched work will be the definitive, authoritative book on how Thomas Merton died.

Update Required To play the media you will need to either update your browser to a recent version or update your Flash plugin.
Download audio file
Topic tags:
Activism, Civil Rights/Human Rights, Faith/Religion/Spirituality, History, Government/Politics, War/Peace