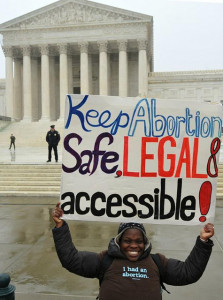 A cornerstone of reproductive justice is making sure services can be accessed by all who need them.

It's not enough to make sure that abortion services are legal and available if women cannot access those services due to the cost of the medical treatment.

In 1973, the landmark Roe vs Wade decision affirmed that a woman's right to choose to end a pregnancy became the law of the land.

Just four years later, the Hyde ammendment would bar the use of federal funds to pay for abortion except to save the life of the woman, or if the pregnancy arises from incest or rape. Rosie Jimenez, a young grad student in Texas, became the first woman killed by the Hyde ammendment as she died from complications from an illegal abortion, which she sought when she was not able to pay for a legal abortion.

I'll be speaking with Samantha Gladu and Stephany Ospina, board members of the Northwest Abortion Access Fund (NWAAF). The abortion fund is primarily operated by volunteers and the working board- our mission is to break down barriers to abortion access for people in the Northwest. More info here: nwaafund.org.

Stephany Ospina is Education Manager at Planned Parenthood Great Northwest and Hawaiian Islands. Samantha Gladu is the Executive Director of the Bus Project, a nonprofit that amplifies the voice and leadership of young people to achieve a more just and equitable Oregon.

Photo is by Debra Sweet