Why Natural Gas is Neither Natural nor Green 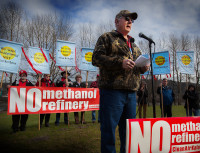 This program originally aired on February 11, 2019

As North America veers away from oil and coal, so-called natural gas is being promoted as a green bridge fuel to a renewable future. Such is the reasoning behind massive gas projects being proposed for the Pacific Northwest, such as the world's largest methanol refinery in Kalama, Washington, the first West Coast LNG export terminal proposed for Coos Bay, Oregon and a complex hybrid LNG storage and bunkering facility in Tacoma. On this episode of Locus Focus we talk some more about the fallacies that riddle recent supplemental environmental impact statements for the Kalama methanol refinery and the Tacoma LNG facility. This time our guest is Pete Erickson, with Stockholm Environment Institute, who prepared a discussion brief last year on the climate implications of the proposed methanol refinery.

Peter Erickson is a senior scientist in the Seattle office of the Stockholm Environment Institute, where he leads the climate policy team.  His research focuses on the connection between fossil fuel infrastructure and climate change. His scientific articles have appeared in the journals Nature, Nature Climate Change, Nature Energy, Environmental Research Letters, Climatic Change, Energy Policy and Climate Policy.

The Stockholm Environment Institute is an international non-profit research and policy organization that tackles environment and development challenges, connecting science and decision-making to develop solutions for a sustainable future for all.

END_OF_DOCUMENT_TOKEN_TO_BE_REPLACED

Movin' On
Joy Can Be An Effective Act of Resistance

It Did Happen Here
Episode Nine - The Story of Jon Bair