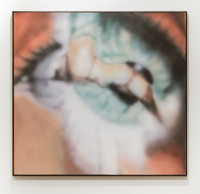 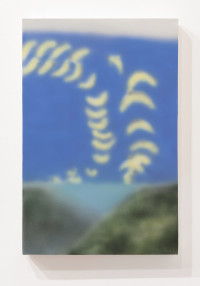 On Tuesday February 26, 2019, at 11.30 a.m. Joseph Gallivan interviews painter Morgan Buck about his show Goggles Glazed Over at Upfor Gallery now through March 31, 2019. Buck talks about his technique for taking found images from the internet, scanning them through a magnifying glass with his phone, and then copying them on to canvas with an airbrush. LISTENER DISCRETION IS ADVISED: Buck also mentions Gerhard Richter.

Portland-based painter Morgan Buck distorts and blurs images culled from the web using a smartphone's panorama photo feature and a handheld magnifier, before carefully translating the results in airbrushed paint. This process removes digital signifiers like pixelation and glitches, leaving viewers with a generatively produced work that appears, in his words, "indistinguishable from a genuine work of imaginative thought."

Through the alchemy of picture building, my current work deals with technology and it’s displacement of the human imagination. Smartphone and internet dependence is rewiring the human brain. With this body of work, I’m insisting on it. I’m trying to take my imagination to absolute zero and rely on unorthodox use of the internet and smartphones almost entirely to generate the content for my work.

This is my method:

I surf the web from my laptop looking for images with strong formal qualities and memorable features. Images that would be difficult for me to just imagine. Than I use a special photography process for a screen shot. Many of us have taken bad cellphone panoramas to distort images of our friends into mutants.  I shoot the screenshots of the found images like one of these a glitchy bad panoramas. I weave the iphone camera around the found image distorting it into a completely different compositions. I also hold a 10x magnification lens in front of the camera (like a macro lens), so I can weave the shot in focus and then pull it out of focus creating dizzying spacial effects and differing levels of recognisability. There’s much more to it than that and it’s not as easy as it sounds, but for sake of keeping it short and sweet, that’s pretty much how I create my source images.

I reference printouts of these macro-bad-panoramic-screenshots as accurately as possible as I paint them large scale with the airbrush. While painting, I’m editing out pixelation, glitches, and other obvious digital process giveaways while translating the image into the painting leaving only the image content. At this point in the process, I see myself as being more of a digital printer than a painter: I become one with the machine, disinterested self expression. The atomized paint on the matte surface created by the airbrush resembles a printed surface enough to fool people into thinking they’re digital prints until they examine at a closer distance.

The result is an body of work eclectic as the internet with high levels of creative ambivalence, yet with a very consistent execution. While the images may look like they took a lot of imagination, in fact, I’m very happy to say, that they took very little. To the viewer the images are obscured so the viewer can’t exactly tell what's going on, but has enough information to activate their own imagination; thus turning the imagination to the viewer not the artist. Really, I’m just a viewer who responded to the images my process created for me.