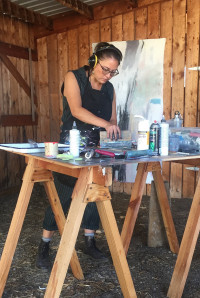 For more than 14 years, southern Oregon communities have been fighting a proposal to build the 229-mile Pacific Connector fracked gas pipeline that would cross more than 400 rivers and streams on its way across Southern Oregon to the Jordan Cove LNG export terminal at the Port of Coos Bay. This massive project poses a significant threat to indigenous sovereignty and tribal treaty rights, human health, and planetary survival. Cultural resources, traditional tribal territories and burial grounds are threatened by both the pipeline route and the LNG export facility. Additionally, the project would impact waters and wildlife of current, historical, and spiritual importance to the Tribes.  Because of these concerns, the Karuk, Yurok, and Klamath Tribes in Southern Oregon have adamantly opposed the Jordan Cove LNG Export Terminal and the Pacific Connector Pipeline.

On this episode of Locus Focus we talk with Ka'ila Farrell-Smith, a contemporary Klamath Modoc visual artist and activist, about how the tribes are leading the struggle to stop Jordan Cove and protect the waters and wildlife of their ancient homelands.

Watch a short video about the Pacific Connector pipeline on the Klamath Tribe Website.  Scroll down and click on the video link at the bottom right of the page.

Resources to find out more about Jordan Cove and the Pacific Connector Pipeline: