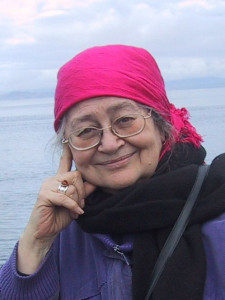 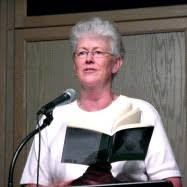 Talking Earth celebrates the return of longtime host Barbara LaMorticella tonight.  She has Judith Barrington on as her guest tonight, to read her work and discuss poetry.
Barbara LaMorticella lives in a cabin in the woods outside Portland, Oregon. She has edited or co-edited three collections of Portland poetry including Portland Lights in 2000. In 1997, her second collection of poems, Rain on Waterless Mountain, was a finalist for the Oregon Book Award and in 2000, she received the first Oregon Literary Fellowship for women writers. Barbara was awarded the Stewart H. Holbrook Literary Legacy Award by Literary Arts in 2005, an award presented to a person or organization in recognition of significant contributions that have enriched Oregon's literary community.   Also, Barbara will receive the first Soapstone Bread and Roses Award, given to honor a woman whose work has sustained the writing community, on International Women's Day, March 8, 2019.

Judith Barrington was born in Brighton, England, in 1944 and moved to Portland, Oregon, in 1976. She has published seven collections of poetry, most recently “Long Love: New and Selected Poems” (2018). She is the author of “Lifesaving: A Memoir”, which was the winner of the Lambda Book Award. She also wrote the textbook “Writing the Memoir: From Truth to Art”, now in its 12th printing.

Judith is well known as a writer and much sought-after as a teacher. She has been a faculty member of the MFA program at the University of Alaska at Anchorage. She offers workshops at many conferences and writing events in the U.S. as well as in England and Spain.