Book Mole: Girl in the River 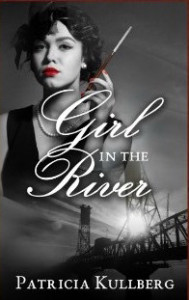 It is with great pleasure that I talk with you this morning about a splendid novel by a good friend and fellow Old Mole, Patricia Kullberg. I’m not sure how this novel slipped by me in 2015, but it did. While at lunch with another Portland feminist and leftist, Johanna Brenner, in the course of our conversation Johanna asked, “Have you read Patsy’s novel?” No, I was ashamed to say, I had not, and could not really recall it ever being mentioned to me. The novel is Girl in the River, and besides being a rich historical novel about Portland and about the work of one particular Portland woman, it is a wonderfully told story.

Since I knew Patricia had been a physician and Medical Director for Multnomah County Health Department, I expected her novel to be well researched and historically significant, what I did not quite expect was how totally captivating her story would be and how convincing and well fleshed out her characters are. Her main characters are Mabelline (a.k.a. Mae Rose), Mae’s dear friend Trudy, and Dr. Ruth Barnett. Although Patricia hastens to tell the reader that her characters are fictitious and the story a product of her imagination, there can be no doubt that Dr. Barnett is modeled on a real woman—a woman who helped hundreds of women terminate their pregnancies. For many years, Dr. Barnett maintained her clinic under a “longstanding arrangement between the legal establishment and the abortionists.. So long as no woman died, the law looked the other way…And no patient of Ruth Barnett’s had ever died. She was the best. Everyone knew it, from the mayor to the street sweeper.”

Mae comes to know Dr. Barnett because she and Trudy are very sought after prostitutes who are very much a part of the high society of Portland, and Dr. Barnett is also a well known part of that ‘high society’. Mae’s mother ran a boarding house in a small town in Portland, and Mae is her do-everything helper; she helps in the kitchen, cleans the rooms and looks after her hard-working mother. When Mae’s mother, Lilly, dies quite young and unexpectedly, “a man with a pressed shirt and clean nails showed up at the Rose Home for Mill Hands and Lumberjacks. He’d come to take possession not of Mae, but of her home. He was from the bank and had papers to prove they owned it.” For a time she turns to a man she already knows for help;  “She went to live with Mr. Goshorn and his six striplings.” Fortuntely for Mae she is able to extricate herself fairly quickly from that slave-like situation, and soon finds herself on the streets of Portland with no money and no real means of employment. She is soon arrested for vagrancy (the catch-all charge used to incarcerate the poor and jobless.” She finds herself in Rocky Butte jail without bail or any likelihood of freedom. Already an avid reader, she is hopeful when she hears that:

Rocky Butte had a library. Mae, picturing the colossal, wood-paneled room of the library downtowns with stacks and stacks of books, had been excited until she surveyed what the jail had—five copies of the Holy Bible; two guides to reading it; several manuals on household crafts, half of which Mae could have written herself; a couple dozen novels like Little Little Women and Pollyanna; and several issues each of Dime Detective and Screen Book, dog-eared and torn up.

Without giving up too much of the story, suffice it to say that Mae is eventually rescued by a woman named Trudy who admits to Mae that she is a prostitute and counsels her to avoid pimps at all costs, and suggests that Mae go into business with her (under the protection of a Madam). “…Mae decided maybe she didn’t mind the big bucks and being her own boss, the fun and the glamor. She liked being admired. She didn’t give a hoot about being loved. Not by a man.”

Mae and Trudy have quite a good life together and genuinely love each other, though Trudy always seems to want more from Mae than she can honestly give.
The descriptions Patricia Kullberg gives of Portland street life and the web of political and police corruption shine with authenticity, and she often quotes or paraphrases from news stories of the time, adding to the veracity of her story.

Eventually, Mae wants out of prostitution, and she manages to talk Dr. Barnett into taking her on as an assistant. Certainly a big step down in income and in the luxuries of her daily life, but for the first time she has work that is deeply meaningful to her, and works for a woman she genuinely admires.

This is a rich and wonderful story; once I started it, I read it up in two days and felt in its thrall for many weeks after. I don’t think I have done justice to the complexity of this tale nor the relationships that Mae has with both men and women. I will close by quoting from the epilogue:

Ruth Barnett continued to perform abortions after she was arrested and her clinic shut down in 1951. She never turned a blind eye to a woman in trouble. She was repeatedly arrested and hauled into court, but did not exhaust her legal appeals until 1967. At the age of seventy-eight and suffering from malignant melanoma, she became the oldest woman ever sent to prison in Oregon. She was paroled five months later and died in 1969, less than four years before the landmark decision, Roe vs. Wade.

I have been talking about Patricia Kullberg’s novel, Girl in the River. This is Larry Bowlden for the Old Mole Variety Hour.

Update Required To play the media you will need to either update your browser to a recent version or update your Flash plugin.
Download audio file
Topic tags:
Arts/Culture, Women, History, Health, Fiction