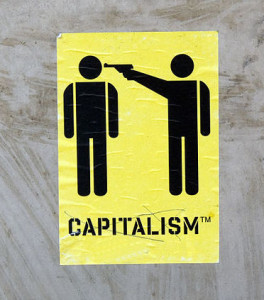 According to the ideology that passes for common sense in a capitalist society, there is a bright line between organized crime and “legitimate” business. But they’re not really so different. Here’s how Megan Day reveals their similarity in a piece a few days ago in Jacobin Magazine. Quoting,

The mafia is famous for running protection rackets. This usually consists of a mobster sauntering up to an unsuspecting resident or shopkeeper, making thinly veiled threats of violence …, and then offering peace and security for a fee. A person is just going about their business when a powerful entity barges in, simultaneously creating a problem and selling the solution. The result is hell for ordinary people, easy money for gangsters.

You know who else does this? Capitalists.

Here’s an example: the pharmaceutical company Purdue started manufacturing OxyContin in 1996, claiming that it was non-addictive. For years, they knew that was a lie, but covered it up while pushing for reckless prescriptions and higher doses anyway.

After millions of people did in fact become addicted to OxyContin, opening the door for many to use and become addicted to heroin, the company’s board saw an opportunity. They started talking about expanding into the addiction treatment market to become an “end-to-end pain provider.” According to ProPublica, “Purdue executives discussed how its sales force could promote Narcan,” a drug used to treat overdoses, “to the same doctors who prescribed the most opioids.”

Barge in, cause problem, sell solution. Money in the bank.

If we are going to unmask capitalism as crime, we have to have a deeper understanding of crime than whatever the capitalist state defines as illegal. Here’s a more philosophical conception of a criminal moral philosophy from Norman Bucklew,  serving a life-sentence for murder and armed robbery in Leavenworth:

I'm a thief.  I don't think robbing a bank is wrong.  If I want to take the money in a bank, then I'm going to take it, and if you catch me and put me in prison, I'm not going to sniffle about being in the pen.  But don't try to tell me what I did was wrong…

I don't respect the law because laws are for people who are weak and need them.  If someone comes into my house and takes something, I'm not going to call a cop.  I'm going to deal with it, and if I'm not man enough to get it back, then that guy has a right to take whatever he wants because I don't really deserve to own it.  That's how society should be.[1]

The purely criminal perspective, then, is that you have a right to whatever you are strong enough to take and to hold on to.  The only limit to the exercise of power is an opposing power.

Now life among people who lived like would a war of all against all, nasty, brutish, and short, as Thomas Hobbes pointed out over 300 years ago. How can you enjoy the things you have in your house when others are constantly trying to break in and take them?  How can you go out to get more and leave what you have unprotected?  How can you even go to sleep at night?  So the reasonable thing to do would be to agree on a set of laws, and institutions for their enforcement, to protect life and property.   Instead of having to risk your life applying your own justice, you turn justice over to the state.  You now have peaceful relations  with your neighbors instead of war, because the State is now the only legitimate user of violent coercion.  In this way, the category of crime comes into existence.  Crime is the unlawful taking of things that belong to other people, whether their lives or their property.  Without the state and its laws,  nothing really belongs to anyone.  Crime is now an intruder, rather than the norm.

But notice what has not been criminalized by the capitalist state: the unlimited accumulation by individuals and corporations of money and property. Crime has not really been pushed outside, it has just been organized.  People like Norman Bucklew can carry on in peace with the same purpose as before, namely to take away as much as they can from each other, only now without the use of private violence.  It's really only the state of war made polite.  Each individual must still always be vigilant to avoid being evicted, fired, bankrupted – or addicted to some drug from big pharma, for someone else's profit.  There is no common commitment to the well-being of everyone; there is only the individual's commitment to him or herself, regardless of the impact of one’s depredations on others.  This is, in essence, a society organized for the flourishing of crime.

Crime is the willingness to seize whatever one can get without consideration of the effect of that seizure on the lives of others.  It is a refusal to cooperate and an insistence on competition.  It is a willingness to rely on coercion and deception to get what one wants.  In this sense, every large corporation is as criminal as Norman Bucklew and the Mafia.  The only difference is in the degree to which they control the state and the media.

Apologists for capitalism say we owe nothing to each other just because we are members of society.  The basic norm of capitalist society is self-sufficiency.

Most Americans, in fact, think they do have social responsibilities to the needs of others.  But the doctrine of complete independence from others is a powerful idea in American thought and it occasionally leaks out in unadulterated form.  Some years ago, a Republican Treasury Secretary Bush's Treasury Secretary wondered aloud whether Social Security and Medicare are really necessary. "Able-bodied adults," he said,  "should save enough on a regular basis so that they can provide for their own retirement and for that matter for their health and medical needs."[2]  Republicans are still anxious to make cuts in Social Security and Medicare. According to Forbes Magazine, the higher deficits caused by the Republican tax cuts of 2017 will be used by political elites to call for cuts in government spending, and if they have their way, Social Security, Medicare, and Medicaid will be on the table.

This drive to diminish the help we all provide for all of us recalls Margaret Thatcher's infamous remark, "There's no such thing as society."  And in a way, she was right: capitalism isn't so much a society as it is an anti-society -- a system of organized crime.  A real society, a legitimate society, would, instead, be organized cooperation: society organized into forms of cooperation aimed at the full and free development of all its members. And that contradicts the fundamental principles of capitalism.

Update Required To play the media you will need to either update your browser to a recent version or update your Flash plugin.
Download audio file
Topic tags:
Economy

END_OF_DOCUMENT_TOKEN_TO_BE_REPLACED

Wednesday Talk Radio
Is the Trump era really over? Guest Ted Rall warns that "December will be very dangerous"

END_OF_DOCUMENT_TOKEN_TO_BE_REPLACED

View the video of the 2020 Annual Meeting of the KBOO Membership which was held online Nov. 7, 2020. You can also see the election results for KBOO's Board of Directors.