Anti-Fascist Struggle in Europe and Repression in Russia 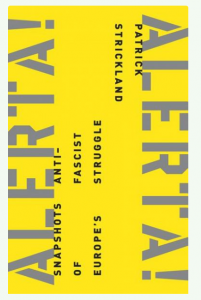 2 interviews: one with a Russian anarchist about the recent torture & repression by the FSB in Russia against anarchists & anti-fascists; then a chat with Patrick Strickland, author of "Alerta! Alerta!" about antifascism in EU

This week, we feature two segments on the show: an interview with a Russian anarchist about the recent ramping up of torture and repression by the FSB in Russia against anarchists and anti-fascists  (00:14:13); and a chat with Patrick Strickland, author of "Alerta! Alerta!: Snapshots of Europe’s Anti-Fascist Struggle” (00:34:17); plus anarchist prisoner Sean Swain on his bid to "Build The Wall" (00:08:27). Downloadable here.

First up, Bursts spoke with Tania, a Russian anarchist, a member of the crew who runs the RUpression website documenting Russian state agencies like the FSB's use of torture to extract stories to build conspiracies to legitimize their tightening of restrictions on public gatherings, chill the political and media landscape, and sustain a state of sense of fear among the populace. We discuss the death of Mikhail Zhlobitsky in a bombing of an FSB office in October, the current state of anarchist organizing in Russia, and the past political repression since 2012 and the cases in Pensa and the 2017 "The Network" conspiracy case (which we've spoken of in this show in the past here and here). In February 2019, a situation unfolded where Azat Miftakhov disappeared, came back tortured, and accused of taking part in an anarchist terrorist plot. Azat was released by court order only to be re-arrested by another police agency (well documented in this crimethInc article, alongside some downloadable posters for pasting around your town).

You can learn more about the case by reading and following rupression.com

Secondly, William had the chance to interview Patrick Strickland, who is a journalist and author, about his recently released book “Alerta! Alerta! Snapshots of Europe’s Anti-Fascist Struggle”. This book follows the stories and lives of 5 European people who do broadly defined antifascist work or struggle. For this interview we talk about Strickland’s journalism, the experiences of compiling this book, and about understanding elements on the far right that might enhance anti-fascism, in the so called US, Europe, and elsewhere. Follow him on Twitter @P_Strickland_ for news and upcoming projects!

Show Up For Rayquan Borum!

If you are in Charlotte NC tomorrow, Monday the 11th, consider showing up to support Rayquan Borum, who is a Black activist arrested during the Charlotte Uprising, a days long protest to mourn and rage against the police murder of Keith Lamont Scott in 2016. From charlotteuprising.com/statement : “The uprising in Charlotte is a direct response to sustained police and vigilante violence against Black people in this city and across the country: Keith Lamont Scott, Jonathan Ferrell, Aiyana Stanley, Jones, Tyre King, Korryn Gaines, Janisha Fonville, Terence Crutcher and so many more. These are names of victims we know and deeply mourn, understanding there are so many other people who have been unnecessarily taken from us.”

The arrest of Rayquan Borum was a direct attempt by police to frame Mr. Borum, and he is finally going to trial after 2 years being held in and out of solitary confinement. The trial will be held starts February 11th, and will start at 9:30am in room 5370 at the address 832 East Fourth Street Charlotte, NC, which is the Mecklenburg County Courthouse. You can follow the Charlotte Uprising on twitter, facebook, and tumblr for more ways to get involved and support the folks facing ongoing repression from the Uprising. And here is a link to a useful court support quicksheet made specifically for this trial! Court solidarity needs for Rayquan are ongoing, so plug in when you can.

Lawyers & activists doing prisoner support have been concerned with new Federal Bureau of Prisons' rules limiting the type of mail people in prison can receive -- for example, rules that people in federal prison can only get white paper / envelopes, and no cards or drawings.   There is work being done to look into what is going on across the country on this issue. If you have heard anything, they’d love to hear about it.

They are also trying to collect evidence of what is happening at all the different federal facilities.  If you have any of the following (or if you feel comfortable asking for any of these types of things from people in prison you are in contact with), that would be super helpful, including:

If you are interested in potentially working with us around this issue, let the folks at Certain Days Calendar know, and they can reach out with info about their next meeting. Get in touch at: info@certaindays.org

Free Tibet celebration in Scotland and around the world

If you’re listening in Edinburgh, Scotland, there’ll be a March on Sunday March 10 from The Mound in support of 60th anniversary of the Tibetan Uprising to the invasion and occupation by the Chinese communist regime forces. On the subject of resistance and the Tibetan Diaspora, there’ll be guest speakers making speeches and then a march to Scottish Parliament at Holyrood. TBA there may be a film screening afterwards. The event is scheduled from 12-2pm UTC More can be found on fedbook by searching “Tibetan Community in Scotland”.

Update Required To play the media you will need to either update your browser to a recent version or update your Flash plugin.
Topic tags:
Activism, Civil Rights/Human Rights, Civil Liberties, Global Affairs, Government/Politics, Police