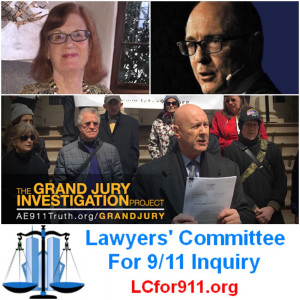 David Meiswinkle and Barbara Honegger of The Lawyers' Committee for 9/11 Inquiry, and Richard Gage AIA, of Architects and Engineers for 9/11 Truth speak with John Shuck about this development.

This is from a press release dated November 26th, 2018 from The Lawyers' Committee for 9/11 Inquiry:

What does this mean? Will the crimes of 9/11 finally be prosecuted?

Barbara Honegger, M.S. has served as White House Policy Analyst and Special Assistant to the President for Domestic Policy, Director of the Attorney General’s Law Review at the Dept. of Justice, and for more than a decade was the Senior Military Affairs Journalist at the Naval Postgraduate School, the premiere science, technology and national security affairs graduate research university of the Department of Defense. Barbara is an officer and board member of The Lawyers' Committee for 9/11 Inquiry.

Richard Gage, AIA became interested in researching the destruction of the WTC high-rises after hearing the startling conclusions of a reluctant 9/11 researcher, David Ray Griffin, on the radio in 2006, which launched his own unyielding quest for the truth about 9/11. AE911Truth now numbers more than 3,000 architects and engineers demanding a new investigation into the destruction of all three World Trade Center high-rise buildings on 9/11.

Update Required To play the media you will need to either update your browser to a recent version or update your Flash plugin.
Download audio file
Topic tags:
Activism, Global Affairs, Government/Politics, Law/Court/Crime, Media, War/Peace