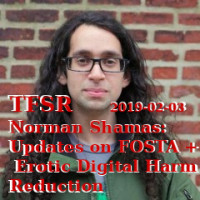 This week, we continue our look at sex, work and the state with guest, Norman Shamas. Norman Shamas is an activist and educator whose work focuses on human-centered information and digital security and privacy. Now, Norman is not a lawyer but shares their insights about the legal situation around FOSTA, or Fighting Online Sex Trafficking Act that passed into law in the U.S. last year and it’s implications for sex workers, for those trying to fight sex trafficking and for people communicating desire without coercion or monetary exchange, folks looking for a hookup. This interview was conducted for our Error451 podcast, an occasional project focusing on digital security and tech from an anarchist perspective, but because of the prescience of Norman’s words, we wanted to share it as an episode for the airwaves. Later in the interview we talk about Norman’s writing a bit, including issues around queer dating apps and how they’ve been used to persecute folks for their sexualities and genders in various parts of the world and how we can pressure app developers and platforms to take the security of their users more seriously.

For the full conversation including links to articles and subjects we talk about, as well as this week’s Sean Swain segment, check out our podcast version available at thefinalstrawradio.noblogs.org. Subcribing to our show is free and easy if you have a computer or a smart phone. There are some instructions up at our website under the “podcasting” tab at the top of the page.

Hacking // Hustling (incl. a recording of the panel): http://melissagiragrant.com/hackinghustling/

On February 13th, 7PM at Hooked on Colfax in Denver, CO, folks’ll be sharing love and solidarity with political prisoners with letter writing.

There’ll be a presentation from the Anarchist Black Cross with tips for writing a letter and the February birthdays.

The event will be excitedly co-hosted by many local groups including the Denver Anarchist Black Cross, Denver Black and Pink, Denver IWW, Femme Left, and the Denver CryptoParty.

If you’re in New York, there are rolling demo’s at the Brooklyn Metropolitan Detention Center where it was discovered that prisoners have been held with limited heat and electricity for days now during this time of record-breaking cold, as reported in the New York Times on February 1st. To keep up on actions around this, one can check out IWOCNYC, the New York City Incarcerated Workers Organizing Committee where demo’s are being announced. If you’re concerned for the health and safety of the over 1,000 prisoners at the MDC Federal jail but can’t make it to a demo, the group Sunset Park for a Liberated Future has called for a phone zap. Those wanting to participate can call Warden Herman Quay & Associate Warden David Ortiz at 718-840-4200. You can also call
Nicole McFarland, US Marshall Assistant Chief at 718-840-4200 ext. 41740.

A sample script from Black and Pink NYC reads:

“I'm a resident of NYC and am very concerned about the situation at MDC. People are living in intolerable conditions without heat or hot meals. This is unacceptable and a violation of human rights. I believe this poses serious harm to the health and safety of people at MDC and fails to meet Eighth Amendment standards prohibiting cruel and unusual punishment. What is your action plan to stop this immediately? What do you commit to in ending this suffering of people in your custody?”

Donate or Get TFSR Swag