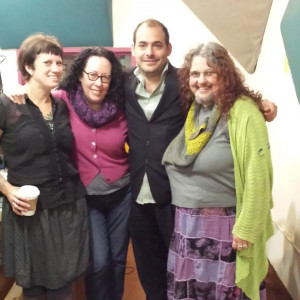 All in one week, Positively Revolting celebrates our 25th anniversary, and co-host Lyn has crossed the veil.

It is with a full and heavy heart that I bring the news of Lyn's passing to her listeners.

Lyn has been a co-producer and co-host of Positively Revolting for 7 years. A genius with the art of conversation, she wove a rich blend of analytic brilliance, compassion, and humor into her words.  She was fierce in the struggle to smash the patriarchy.  Her wit and wisdom shone in her astrological insights.

An essentially private person, Lyn never wanted me to speak of why she'd been absent from the show most of the last year, so I know this news comes as a surprise to many of our listeners. She crossed over last Friday, January 25th.

And at the same time, the first Friday in February is Positively Revolting's Anniversary, and this year we turn 25! In February of 1994, KBOO's then AM News and Public Affairs Director, Kathleen Stephenson, introduced me to Melodie Silverwolf, another pagan-feminist-organizer in the community. We were both interested in creating a talk radio show, and decided to try our first program together to see how we fit.  We went on to produce Postively Revolting every week together for 14 years.  After experiencing, um, artistic differences, we decided after 14 years of working as partners in the program, we would alternate weeks. Melodie quit producing talk radio after another year, and pursued interests in developing community television. Melodie passed away in April of 2015, after moving to Spokane, WA.

I have continued Positively Revolting since then, and plan to continue to do so for quite some time to come, should the universe and KBOO will it to be so.

Anarcha-feminist talk radio for a quarter of a century!

In your face, patriarchy!!!

Listeners are encouraged to call in with your memories and stories of Positively Revolting over the years, as we remember Lyn, and celebrate the community we have created through this show.

Update Required To play the media you will need to either update your browser to a recent version or update your Flash plugin.
Download audio file
Topic tags:
Activism, Environment/Climate, Faith/Religion/Spirituality, LGBTQ, Sexuality, Women