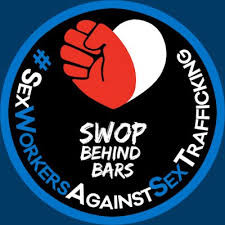 This week, William spoke with Jill McCracken, codirector of SWOP Behind Bars, or the Sex Worker Outreach Project, Behind Bars chapter. Jill is also a professor at University of South Florida at St. Petersburg teaching rhetoric and gender and sexuality studies, with a focus on sex work, prostitution, and trafficking in the sex industry. For the hour we’ll hear Jill speak about the work that SWOP and SWOP Behind Bars do, FOSTA/SESTA and some realities faced or worked through by sex workers in the U.S.

The mission statement for SWOP Behind Bars reads:

“SWOP Behind Bars is a national social justice network dedicated to the fundamental human rights of people who face discrimination from the criminal justice system due to the stigma associated with the sex trade.  We advocate for full decriminalization of consensual sex work, ending cash bail, drawing attention to the effects

of generational poverty on sexualized violence against marginalized and vulnerable women while providing services and support with a focus on ending violence and stigma through education and advocacy.”

One person name dropped by Jill during the interview was Magali Lerman, a consultant at Reframe Health + Justice consulting, who said that a product of FOSTA was to destroy the middle class of sex workers.

First, a reminder that Blue Ridge ABC has a plethora of events this coming weekend here in Asheville starting 6pm sharp on Friday, Feb 1st at Firestorm with a showing of Long Distance Revolutionary: A Journey with Mumia Abu-Jamal about the prisoner, his writing and struggle for freedom. Then at 8pm, VVITCHGANGCoven will present a showcase of local talent from their crew and beyond at The Mothlight. Local Hip Hop and Beats, ya know? It’s a benefit for Blue Ridge ABC, so come visit the table. And on Sunday from 5-7pm at Firestorm, BRABC will host it’s monthly political prisoner letter writing event.

If you’ve got the means to travel, on Saturday February

2nd in Stone Mountain Georgia there will is a call for people to oppose white nationalists at Stone Mountain, GA and their call for a rally there. The racists don’t have a permit and are pissed off that they keep losing their racist monuments around the South. For those opposing, we interviewed an organizer with Front Line Organization Working to End Racism (or FLOWER), about what it’s all about and what to expect. You can hear that on our January 13th episode.

Jason Reynard Walker is a prisoner who has been punished by prisoncrats in Texas again. He was transferred on

January 11th to the Allred Unit and his supporters are very concerned about the welfare and health of Mr. Walker. He reports being denied his  prescribed medications; being forced to stand outside in the rain; being denied basic necessities of blankets, sheets, toilet paper, soap, etc.; being served food he is allergic to; being denied requested medical services. All these abuses must be corrected immediately. You can find info on how to support Jason up at the IGD article entitled “Abuse at the Allred Unit”.

Sean Swain is Back!

Sean Swain’s segment is back! Listen in and he’ll update us on how he’s been. Past segments, all available for listening, broadcasting and sharing, can be found here.

You can write to Sean Swain at his NEW / old address at:

To read more of Sean’s writings and keep up on his case, check out seanswain.org