These Are Strange Times, My Dear 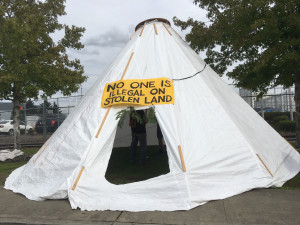 It seems as if Americans have never before been involved in a situation where every day brings a loud new threat to our public order and to our commonwealth. Our executive branch demands our scrutiny on a daily, even hourly basis. We watch as America and much of the world grows increasingly polarized and in the din of this polarization the truth gets drowned out.

On this episode of Locus Focus, we're joined by Portland poet and essayist Wendy Willis, whose new book of essays These Are Strange Times, My Dear: Field Notes from the Republic, expresses the dismay, horror, fear and wonder that so many of us face in this age of Trump and the Resistance.

Wendy Willis is a poet and essayist living in Portland. The winner of the Dorothy Brunsman Poetry Prize, Wendy has published two books of poems--A Long Late Pledge and Blood Sisters of the Republic.  Wendy is the Founder and Director of Oregon’s Kitchen Table, a program of the National Policy Consensus Center (in the Hatfield School of Government) at Portland State University and is also the Executive Director of the Deliberative Democracy Consortium, a global network of organizations and leading scholars working in the field of deliberation and public engagement.  She is the former Executive Director of City Club of Portland and has served as an Assistant Public Defender for the District of Oregon and law clerk to Chief Justice Wallace P. Carson, Jr. of the Oregon Supreme Court.  Her next book of essays, These are Strange Times, My Dear, is due out in February. The book launch will be at the Powells on Hawthorne on February 11, 2019.

Update Required To play the media you will need to either update your browser to a recent version or update your Flash plugin.
Download audio file
Topic tags:
Activism, Arts/Culture, Civil Rights/Human Rights, Environment/Climate, Government/Politics