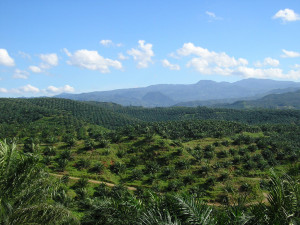 In the mid-2000s, Western nations, led by the United States, began drafting environmental laws that encouraged the use of vegetable oil in fuels. But this ambitious move to reduce carbon dioxide emissions and curb global warming, had unforeseen consequences. Warnings that the policies could have the opposite of their intended effect went unheeded. Instead this mandate has led to industrial-scale deforestation and a huge spike in carbon emissions.

On this episode of Locus Focus we talk with ProPublica writer Abrahm Lustgarten about the environmental and climate calamities the biofuels mandate has wrought.

Abrahm Lustgarten is a senior environmental reporter at ProPublica, with a focus on the intersection of business, climate and energy. His recent article "Palm Oil Was Supposed to Help Save the Planet. Instead it Unleashed a Catastrophe" was published in the New York Time Magazine on November 20, 2018.

Update Required To play the media you will need to either update your browser to a recent version or update your Flash plugin.
Download audio file
Topic tags:
Energy/Natural Resources, Environment/Climate, Government/Politics