US Interference in Central America and the Southern Border Crisis 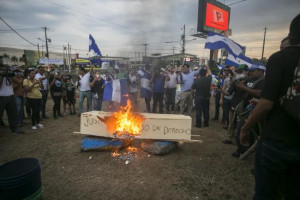 Laurie Mercier speaks to James Phillips about what the mainstream corporate media has been missing in its narrative about Central America by examining the U.S. role behind protests in Nicaragua and migrants fleeing Honduras. Phillips recently retired as Affiliate Professor of Anthropology and International Studies at Southern Oregon University. He has worked in and written about Central America since the 1970s and acts as an expert witness in asylum cases of Hondurans in US immigration hearings. He has written many articles and book chapters on Central American immigrants and refugees, popular resistance movements, and the relationship of the U.S. to Central American countries, and is the author of the 2015 book, Honduras in Dangerous Times: Resistance and Resilience, and a recent piece that appeared in NACLA (North American Congress on Latin America), entitled “Complicating the Narrative about Nicaragua.”

Protests in Nicaragua, May 8 2018. Photo by Jorge Mejía Peralta/Flickr

Update Required To play the media you will need to either update your browser to a recent version or update your Flash plugin.
Download audio file
Topic tags:
Civil Rights/Human Rights, Global Affairs, Immigration, Latino/Hispanic

END_OF_DOCUMENT_TOKEN_TO_BE_REPLACED

Prison Pipeline
The Campaign to Decriminalize Sex Work in Oregon