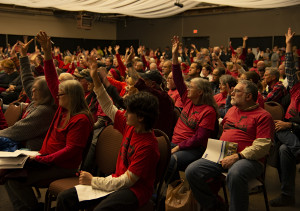 Two years ago, shortly after Donald Trump was elected president, Eric de Place with Sightline Institute wrote to his friends and colleagues: "I want you to write down your predictions for the future. It’s conventional wisdom that the Trump presidency will yield unusual events and disruptions. But what exactly? And how? Think broadly about your hopes and/or dreams and/or fears and/or nightmares and/or delusions and spell out how it’s going to go down. Will Trump be impeached? Over what issue? Will he start a war? With who? Will the markets melt down? What will trigger it?"

We've already opened two two of Eric's time capsules on this show and now it's time for him to join us in opening the penultimate one. After comparing the projections made two years ago with today's realities, we'll move on to talk about the continuing fight to stop fossil fuel infrastructure from gaining a foothold in the Pacific Northwest.

Eric de Place is the programs director for Sightline Institute in Seattle and oversees Sightline’s research and communications teams. He is also a researcher, writer, speaker, and policy analyst who spearheads the Institute’s work on energy policy. Known as a leading expert on coal and oil export plans in the Pacific Northwest, he is considered an authority on a range of issues connected to fossil fuel transport, including carbon emissions, local pollution, transportation system impacts, rail policy, and economics. He is a frequent guest on Locus Focus.