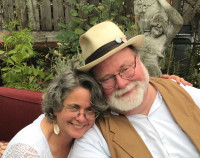 On this special Christmas Eve edition of The Holy Crowley Hour, which, by the way, was Charles Dickens' favorite radio show, we spread holiday cheer with guest Cindy McGean of the Willamette Radio Workshop.

Cindy is a Portland-based writer and teacher, with a background in theater and social services. She’s written short fiction, stage plays, radio scripts, and has recently started writing and performing poetry. In addition to her written work, her theater credits include a range of on-stage and backstage roles as actress, director, and stage manager, including a stint managing props for Tygres Heart Shakespeare Company.

She does most of her scriptwriting now for Willamette Radio Workshop, and that work includes both original shorts and several adaptations for live radio theater, most notably Mary Shelley’s Frankenstein, which won a Mark Time Award for audio fiction, and, of course, Dickens’ A Christmas Carol, which has become a holiday tradition here in Portland over the past 9 years.

We’ll be talking with Cindy about writing for radio theater in general, and “A Live Radio Christmas Carol” in particular. And we’ll be playing you an excerpt from a recent performance on this festive Christmas Eve. All that, plus an interview with one of our favorite holiday guests, the Yule Log, before the clock strikes midnight, and Joe Woods arrives with Far Away Places, where he’ll be ushering in Christmas Day with the most profane music imaginable.

Update Required To play the media you will need to either update your browser to a recent version or update your Flash plugin.
Topic tags:
Arts/Culture, Humor, Media, Music, Radio Theater
Genre(s):
Arts and Culture, Spoken Arts, Radio Theatre