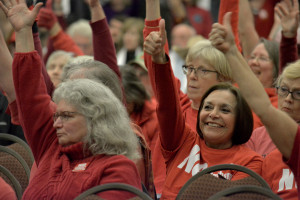 Last week over 1,000 people from across the Pacific Northwest attended a public hearing in Longview, Washington, to comment on the draft supplemental environmental impact statement for the world’s largest methanol refinery, proposed for the Port of Kalama. Project supporters, wearing white scarves, sat at the periphery of a sea of red shirts worn by the project’s opponents. 64 people testified against building the methanol refinery while 27 testified in support. About half of the supporters were local elected officials. Most of the other supporters represented unions for the building trades, who see this refinery as an opportunity for much needed jobs. Opponents on the other hand raise a myriad of environmental, health, economic and social reasons for not building the refinery.

On this episode of Locus Focus, we hear excerpts from this hearing, presenting testimony from opponents and proponents of Northwest Innovation Works’ proposed methanol refinery in Kalama.

You can find out more information about the proposed methanol refinery and submit comments on the draft SEIS until Friday, December 28 at 5 pm.