The War on Yemen: A Conversation with Dr. Aisha Jumaan 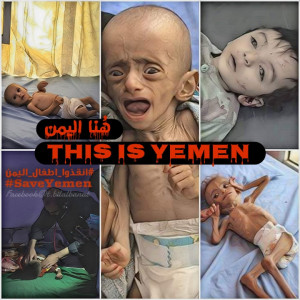 Dr. Aisha Jumaan with the Facts about the Genocide of Yemen. Plus a conversation with His Eminence the 7th Kyabje Yongzin Ling Rinpoche.

The US Senate voted this week 56-41 to end US support of the war on Yemen. According to Vermont Senator Bernie Sanders:

“The Saudi intervention in Yemen has created the worst humanitarian disaster in the world, with millions of people facing imminent starvation. The time is long overdue for the United States to stop following the lead of Saudi Arabia, a brutal regime that recently murdered a dissident journalist and has no respect for human rights. Further, and importantly, the Senate must reassert its constitutional authority and end our support of this unauthorized and unconstitutional war.”

Dr. Aisha Jumaan returns to the Beloved Community to discuss the humanitarian crisis in Yemen and the latest political developments.

Dr. Jumaan is the founder and president of the Yemen Relief and Reconstruction Foundation.  (http://www.yemenfoundation.com) , a nonprofit charity organization that aims to provide relief to the people of Yemen and support peace building efforts.

Professionally, Aisha has been working as an independent consultant in health related projects since April 2013.  She manages and coordinates Health funded projects in Yemen, including the Field Epidemiology Training Program (FETP). Prior to this Aisha was a consultant for CDC FETP program supporting FETP programs in the Middle East. In 2011 she helped establish the Yemen program (amid social and political unrest) in collaboration with CDC, WHO and the Ministry of Public Health and Population.

Between 2008 and 2010, Aisha was the Director of the HPV vaccine project at PATH working in India, Peru, Vietnam and Uganda.  She has served as a Senior Epidemiologist for over 10 years in several divisions at CDC, including Cancer, Immunizations, Nutrition and Environmental Health.  She has been the primary investigator on several research projects and provided epidemiological and statistical technical expertise. As an Assistant Professor at both Emory University School of Public Health in the Epidemiology Department and at Sana’s University in Yemen under the Faculty of Medicine and Health Sciences, Aisha developed and taught intermediate epidemiology to graduate students as well as epidemiology and biostatistics to medical students.

While in Yemen, Aisha served as a National Program Officer for the United Nations Population Fund and as a Health Program Officer for the United Nations Development Fund, supervising several major programs in collaboration with local government institutions. She developed and implemented training programs for US Peace Corps Primary Health Care Volunteers in Yemen, and has evaluated training programs for Primary Healthcare Workers for the Dutch Volunteer Organization SNV. Aisha holds a PhD in Epidemiology from the University of North Carolina, an MPH in Epidemiology from Emory University, and a BA in Biology from Mills College.

Plus John Shuck speaks with His Eminence the 7th Kyabje Yongzin Ling Rinpoche who visited the West Coastthis summer.

He was born in India on November 18, 1985. He was taken to the Tibetan Childrens Village in Dharamsala, after his mother died, and stayed there until His Holiness the Dalai Lama recognized him as the reincarnation of his Senior Tutor, the 6th Kyabje Yongzin Ling Rinpoche, who passed away in 1983.

During this interview, he spoke with John Shuck about leadership, suffering, kindness, and happiness.