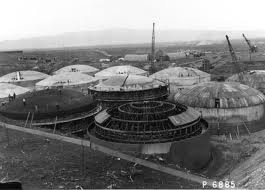 The United States Department of Energy wants to reclassify 70,000 gallons of high-level nuclear waste in a cluster of tanks near the Columbia River. DOE’s proposal seeks to reclassify the pollution as low-level waste so that DOE can fill the tanks with grout and leave the waste at Hanford indefinitely. In response, over 2,000 comments and petitions gathered by a coalition of public interest groups and state and tribal govrernments highlight major flaws in this proposal to reclassify and abandon waste in tanks and soils in Hanford’s C Farm—an area contaminated with nuclear waste containing plutonium, americium, technetium and other long-lived pollution.

On this episode of Locus Focus we talk with Dan Serres, with Columbia Riverkeeper, and Tom Carpenter, with Hanford Challenge, about the next steps to ensure that Hanford gets a meaningful cleanup.

Dan Serres is Columbia Riverkeeper's Conservation Director. He works to engage diverse communities along the Columbia. In 2005, he started with Columbia Riverkeeper as the lead organizer in their successful campaign to protect the Columbia River Estuary, forests, and farmland from the Bradwood Landing and Oregon LNG Liquefied Natural Gas (LNG) proposals and their related pipelines. Since 2009, he has filled the role of Conservation Director where his work has broadened to protecting the Columbia River from a barrage of dirty fossil fuel export proposals including LNG export terminals, coal export terminals, oil-by-rail facilities, and power plants. Dan is also a member of the Hanford Advisory Board, where he speaks up as a public voice demanding faster and more robust cleanup of North America’s most contaminated nuclear site.

Tom Carpenter is the Executive Director of the Hanford Challenge. He brings decades of experience in organizing, litigating, and policy oversight in the nuclear field, much of it devoted to Hanford. He is an attorney, a graduate of Antioch School of Law, and has a Masters in Organizational Design and Renewal from Seattle University. Through his work at GAP and Hanford Challenge, Tom has visited dozens of nuclear sites in the U.S. and Russia, hosted international conferences on protecting nuclear whistleblowers and examining the legacy of highly-contaminated nuclear facilities, and focusing on the Hanford Nuclear Site in southeastern Washington State. Tom helped establish and is a Board member of the Hanford Concerns Council (and its predecessor, the Hanford Joint Council) to mediate and resolve difficult and complicated issues relating to Hanford. He has authored numerous reports and articles on the effects of nuclear production on workforce health and safety and the environment, and established and participated in independent environmental sampling programs at Hanford, Los Alamos, and Russian nuclear sites.